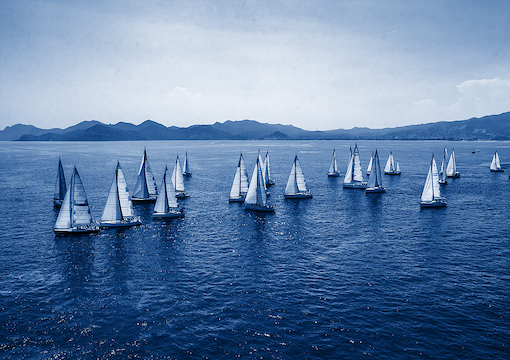 PATMOS—A very long time ago I wrote right here that spending a summer on the Riviera or the Greek isles without a boat was as useless as a eunuch in a cathouse. That was then and this is now, alas. The French and Greek seas are the same, if a little bit more crowded, but the people with boats are very, very different. Back then one knew almost everyone worth knowing, that is everyone with a smart sailing boat, and a few with gin palaces that were graceful. These modern horrors of today that look like refrigerators on steroids, with top-heavy superstructures from bow to stern, helicopters, jet skis, and even submarines on board, chartered to celebrities with hookers included, have killed elegant yachting and then some. Gulf bandits specialize in owning or chartering such abominations, and they have made finding good crews an almost impossible task. As many professional old salts have admitted, why work on a boat whose owner knows about the sea when you can fake it, relax tied up in port, and get paid for doing almost nothing on one whose owner knows only about hookers?

The charismatic Gianni Agnelli, who sailed his beautiful boats very close to the wind, and de-masted one of mine, insisted that one could instantly judge a person by the boat they own. One sure could, and the majority of the good ones were sailing boats. Loel Guinness had an elegant gin palace, as did Onassis with the Christina, but the epitome of elegance was sailing boats. Today I can think of only three beautiful ships that are diesel-powered classics, and they are Mark Getty’s Talitha, Tara Getty’s Blue Bird, and Lord Bamford’s Virginian. I am sure there are more, many more, but I haven’t come across them lately.

“Bushido was so graceful I remember Onassis passing by and giving me a thumbs-up sign for her elegance.”

Needless to say, there are still sailors who love hoisting sails the old-fashioned way, with their muscles rather than coffee grinders, such as those on the Puritan, the boat I take every year under Captain Simone, an old Italian salt who is about the best around the Med waters. The Puritan needs nine sailors, and the wife was worried about what type of virus young sailors might bring on board along with their muscles. One lives very close to others on boats, and one also tends to drink a hell of a lot while sailing. My problem when I was on Bushido and on French waters was the difficulty of going ashore in order to exercise. Every marina was jam-packed with horrors, and the Frogs would not permit anchoring off shore for any length of time. Lack of exercise is the main culprit for gaining weight while on board, as is boozing.

My first Bushido, a 1939-built Swedish Anker beauty, needed a crew of four—the anchor was pulled up manually—and yours truly on the tiller to operate. She was so graceful I remember Onassis passing by and giving me a thumbs-up sign for her elegance. Along with my dad’s Aries, a 1953 Camper-Nicholson ketch, and his 1962 America’s Cup semifinalist Nefertiti, my father and I had three alluring sailing boats on which to do our business. Dad was quite a womanizer, as was his father, and the only time my mother visited on board he hoisted a ball-and-chain flag signaling “wife on board” and for the tarts to stay away. That pennant became legendary among those in the know. My mother was no fool, but the ball-and-chain standard high up on the main mast did its job magnificently. She told me that the one time she decided to drop in on my father she found him dining with a priest.

Yep, those were the days, and nights. We had some wild evenings on board with Nick Scott and Tim Hoare while those two wonderful friends were still kicking. In fact that is how Pugs Club began, with Roger Taylor’s and Tim Hoare’s sailing beauties, along with Bushido, being regularly wiped out by Bob Miller’s Marie Cha. Next week I’m off to the private island of Koronis for the annual Pugs reunion. In the meantime, a last story about the last time I was in Patmos on board the last Bushido.

If it sounds familiar, it’s because I’ve written it here before, but a long time ago. Bushido tied up in Patmos and the living was easy. The boat had been delivered in the South of France and had been sailed to Athens for the 2004 Olympics. I had a judo master, a karate instructor, a wrestler, and a mixed-martial artist on board. After the Games the tough guys flew away and the wife arrived. Once in Patmos, I needed some action and I sent Daniel the German cook out to find it. Daniel was not only the best cook I ever had, he was the greatest pickup artist who has ever existed. I then gathered the crew of six in the stern and proceeded to get drunk with them. Daniel returned with four ladies, perhaps not to the manor born, but no bra straps showing. The last coming up the gangplank asked me if I was the cook. I am the owner, I informed her. Then things got quite rowdy and suddenly Alexandra appeared and ordered everyone out. The crew disappeared quicker than U-boat sailors diving to avoid an attacking destroyer. The last lady out turned and whispered to me, “I knew you were the cook.”