On a High Note 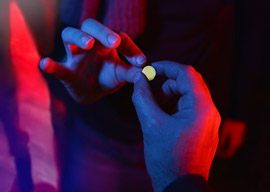 The world is a dangerous place whose inhabitation always ends in death. Is it because or in spite of this that we enjoy scaring ourselves with imaginary dangers? We thrill at trivia in order to forget the overwhelming fact of our mortality.

In the Madrid metro recently they relayed a video suggesting that 75 percent of the Spanish population does not drink enough water. (It is a characteristic of the age that people must not be left without electronic visual stimulation for fear that otherwise they might think.) Men, it was claimed, should drink two and a half liters per day, women two liters; wine and coffee do not count. The video did not state what were the terrible consequences of not drinking the suggested quantities day after day (the Spanish are among the longest-living people in the world); no mention was made of the physiological mechanism with which Mother Nature, in her wisdom, has anciently endowed us, by which we become aware, most of us most of the time, of the need to drink. We are the patient in intensive care, the state is the nurse.

Meanwhile, we persist in doing things that we know perfectly well are inadvisable or self-destructive. I was in Madrid for a toxicological conference in the course of which were reported many incidents of fatal and nonfatal poisonings, mostly self-inflicted.

“On the whole, bores are better with a drink than without.”

Man is a creature, it seems, who does not find the world in which he has been placed sufficiently interesting or satisfying for him to go through without the aid of mind-altering drugs or substances. I am no different in this respect from anyone else, for none of my days go by, except under the direst circumstances, without resort to alcohol at the end of them. I agree with Falstaff’s explanation of why the Duke of Lancaster is so humorless: that it’s no marvel, he drinks no wine. Pedants might argue that Lancaster drinks no wine because he is humorless rather than that he is humorless because he drinks no wine; and it is true that there is no one more boring than an earnest drunk who tries to explain to you how the world really works. But on the whole, bores are better with a drink than without, for even in them, as Falstaff puts it, alcohol

ascends me into the brain; dries me there all the foolish and dull and crudy vapours which environ it; makes it apprehensive, quick, forgetive, full of nimble fiery and delectable shapes, which, delivered o”er to the voice, the tongue, which is the birth, becomes excellent wit.

Nevertheless, like any person of a certain age who has fallen into the gratifying habit of lamenting the state of the world, I was surprised and alarmed by the number of new psychoactive drugs on the market, mainly synthetic cannabinoid receptor agonists, some of the partakers in which end up in hospital with what are euphemistically known as behavioral disturbances. Like almost everything else these days, they are manufactured in China and exported to the rest of the world, a kind of opium trade in reverse; the world is now but distributor and consumer of China’s products.

Much as I regret the spread of the usage of these drugs, I could not help but admire the variety and vivacity of the street names given them, among which were:

The packets in which these various products were sold were all inscribed Not for human consumption, often with a skull and crossbones, which goes to show that hypocrisy or lies are not the province only of the “official” or “regular” culture, but are well installed in the so-called counterculture as well.