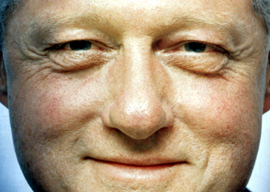 Something called the Clinton Global Initiative has been brought to my attention by an AP dispatch dated September 21st entitled “Bill Clinton: Economy, disasters imperil millions.” At first, I suspected it was a leg-pull, but then I realized, no, this is for real. The impeached 42nd POTUS was kicking off the sixth annual pow-wow of his self-styled Global Initiative. To quote the AP writer Beth Fouhy, “The conference brings together leaders from government, business and philanthropy, who make financial commitments aimed at tackling poverty and disease around the world.” Where have I been? Sounds like a folksy rival to Davos. The Economist has called CGI’s annual meetings “…an important part of the global elite’s calendar.”

A few more quotes from the AP dispatch:

Clinton said the gulf region [Gulf of Mexico, that is] had been hit by “everything but a plague of locusts” and said climate change had made events like hurricanes and flooding more frequent and deadly. “There is every reason to believe the incidents of economically devastating natural disasters will accelerate around the world with the changing of the climate,” Clinton said, urging governments and world leaders to be better prepared for such events.

May I ask, how does Clinton know that? How does anyone know that? Are we supposed to believe it because Al Gore says it is so? After all, this is not history, which can be examined and interpreted. This is the future. Is Bill Clinton now proclaiming himself to be a prophet and sage? Please note, as well, that the current Atlantic hurricane season has been unusually mild, at least so far.

Clinton also pressed attendees on the need to educate and empower women and girls in developing counties, saying the global economy would improve with women’s full participation. “There are still a lot of places in this world where women are part human and part property and where men define their meaning in life,” Clinton said.

Putting aside the open question of do-goodism running amok, where does Bill Clinton get off with such rhetoric, in view of his deplorable track record with “women and girls” while he was Governor of Arkansas and during his White House sojourn?

The former president has reemerged on the skyline, lecturing us about empowering “women and girls.” All right. Stranger things have happened.

I vaguely recall that POTUS 42 was hit with a complaint for sexual harassment while in the White House due to his actions at a prior public sector job in the Governor’s Mansion at Little Rock, Arkansas. He and his legal team went to the US Supreme Court to get the lawsuit quashed, dismissed, or delayed until after he left the presidency. They lost that motion by 9 to 0. Undeterred, Bill Clinton went on to perjure himself in a deposition during the discovery process.

When that felony was exposed as a byproduct of the bizarre Monica Lewinsky affair, it led to Clinton’s impeachment in the House of Representatives. He wiggled out of a conviction in the Congress and escaped jail time in a federal penitentiary for perjury but was compelled to relinquish his license to practice law and left the Oval Office in debt to his high-priced defense team. What a mess.

Fast-forward to 2010, and the former president has reemerged on the skyline, lecturing us about empowering “women and girls.” All right. Stranger things have happened.

Bill Clinton largely steered clear of politics during the conference, but said at one point he wished more world leaders made their decisions based on facts. “Do you know how many political decisions are made in this world by people who don’t know what in the living daylights they are talking about?”

Is the Comeback Kid suggesting that his decisions as president were based strictly on facts, not politics, and that he always knows what he is talking about? Anybody with a stiff drink under his or her belt at this gathering must have gagged. The presumption is stupefying. The implication is that we should check with Bill (or with his designated successor to the Oval Office, H.R. Clinton) so that we will know for sure what to think and how to make the right decisions for the good of mankind.