On Second Thought, Stick to Your Guns 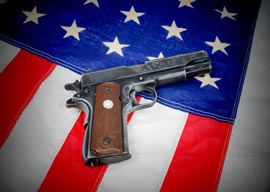 A year ago, in the wake of yet another American High School massacre”this time by a half-British shooter”I wrote a contentious article on gun control here. I made what seemed to me a reasonable case for increased gun control in the U.S. and spoke as an Englishman who has shot all his life, has held a shotgun certificate for 25 years, and would have held a handgun license had the government not knee-jerked that possibility into touch following our own school massacre at Dunblane.

In summary, I am pro-gun, as I am, for example, pro-car, and didn’t see my belief in licensing users with a mandated level of skill, sanity, and noncriminality as making me “anti” either of them. I had assumed”and here lay my error and arguably my arrogance”that a similar sort of belief existed among “reasonable” gun owners in the United States: that they too thought it seriously worrying that they were 33 times more likely to die by someone else shooting them in their country than I am in mine, and if only someone who actually liked guns and knew a bit about them made a sensible case then they might listen. I see much similar commentary in the center-right press today.

I was wrong”and not just in my belief about the pro-gun lobby listening, but in the very fundaments of my argument. Here is the first thing that many anti-gun Americans and almost everyone else in the civilized world does not understand, not least because it is seldom explicitly acknowledged: A significant number of U.S. citizens, perhaps even a majority, are willing to accept these levels of gun violence as collateral damage for a greater good, the liberty to own arms.

“A significant number of U.S. citizens, perhaps even a majority, are willing to accept these levels of gun violence as collateral damage for a greater good: the liberty to own arms.”

This is not to say they approve of arbitrary violence and killing. They would rather terrible things didn”t happen, but they view massacres like that in the Charleston, S.C., church as the British might view a terrible traffic accident. When the NRA chants its slogan, “Guns don”t kill people, people kill people”, we in the U.K. find it not just absurd but almost hilarious”as Eddie Izzard once remarked as part of his comedic shtick, if you really believe that, try pointing your fingers at someone you want to kill and saying, “Bang.” However, if the British Driver and Vehicle Licensing Agency launched a campaign with the slogan “Cars don”t kill people, bad drivers kill people,” would my own people find that ridiculous? No. I myself have been spending some time considering exactly why not. I started to come to understand this completely different way of looking at things, because I am a liberal, albeit one of classical, libertarian bent.

Early July brings my annual reunion with two dozen or so “freedom-loving” Americans, in the best sense of the term”war veterans, ex-cops, and bon viveurs with a penchant for tradition and danger”in Spain, where we run the bulls of Pamplona together. I’ve even written a book with a bunch of them”Fiesta: How to Survive the Bulls of Pamplona“whose title caused amusement around the world when one of our team got quite badly gored. The main thing I took away from these men, who view me with more than friendship, but also trust”shared physical risk and reliance on others to help you in jeopardy forms a very particular bond”was quite how differently they view their government.

It is a function of British history and temperament that we trust our government as much as we do. Our Right is in many ways unified in support of our institutions because they reflect a proud history. If anything, our Left loves government even more for what it can be harnessed to do in terms of wealth redistribution and welfare. Whereas it is a function of American history and temperament that many deeply distrust the state on both the Left and the Right. For example, only in the U.S. could the fear of a self-sustaining and unaccountable “military-industrial complex” within the governmental machinery be first stoked by a Republican president who had previously been a five-star general and Supreme Allied Commander in Europe. Dwight D. Eisenhower coined the phrase in his farewell address of 1961. One cannot imagine Churchill or Monty speaking similarly.

This paranoia about tyranny is the motivation behind the entire United States Constitution, and in one key section, it even prohibits the maintenance of a standing army in time of peace for this reason. This is what led to the famous Second Amendment to the Constitution, which says in full: “A well regulated Militia, being necessary to the security of a free State, the right of the people to keep and bear Arms, shall not be infringed.” A militia is the only way to keep a citizenry from which an army can be rapidly trained up in case of invasion, and act as a deterrent to the invasion in the first place.