On Ted Morgan, Piers Paul Reads, and Other Greats 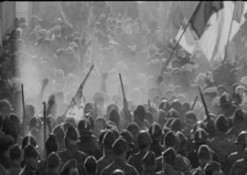 Gstaad. It was a balmy June day, Pentecoste Sunday, a major holiday in France. The Casino de la Corniche was a chic and popular establishment on a rocky spur between Saint-Eugene and Pointe Pescade. The beach was the finest in the area, and the young French lieutenant, scion of a ducal family, went for a swim with a friend. After he walked up the hill, with its plush gardens surrounding the casino, where from 4.00 to 8.00 there was a matinee dansante with couples dancing the fox trot and the tango. By all accounts it was an idyllic scene. “The deep blue of the Mediterranean, the cloudless sky, the honey-colored sand, the intense light, the gulls circling, the young men preening, and the girls pretending not to notice—it was all there for the rich, and even the poor.” I’ve lived such a scene many times, with girls walking by giggling and whispering, and casting side glances to see if they were being noticed. But not on this occasion.

In the late afternoon the lieutenant ambled up to the casino garden and sat under an acacia tree eating spicy sausages. He could hear the strains of the nostalgic tango from the dance floor. His friend wondered why everyone loved this land so much. Because of its beauty, came the answer. As they were speaking, an explosion inside the casino ripped away the walls and windows. The two ran inside down a long hall with a red carpet. The bomb had gone off under the bandstand, which had been torn to pieces. The dance floor was littered with body parts, piano keys and mangled saxophones. The roulette tables were shredded, the croupiers, those who were still moving, writhing on the green felt tables. Rien ne vas plus. His friend picked up a woman’s shoe with the foot still in it. All the victims were French colons. Not a single Arab had been killed because of a very simple reason. The matinee dansante was barred to Arabs. This was Algiers, part of metropolitan France, in 1958. The lieutenant was Sanche de Gramont, now known as Ted Morgan, and I am quoting from his wonderful memoir, My Battle of Algiers

. Most of the casualties were under the age of 25. The reaction was swift and brutal. We all know the score. An eye for an eye and so on.

“Read’s latest novel is all about modern life—memory, sadness, mourning, self-examination, and forgiveness. It made me feel good after the sadness of reading about Algiers. Reading, of course, is the antidote to seeing shrinks.

I used to read Morgan as Gramont in the old Herald Tribune when I lived in Paris. He was and is an elegant writer who has written more than 25 books, including a terrific biography of Somerset Maugham. His Battle reads like a detective novel but also like the memoir that it is. The mystery involves how the French under the great General Massu and the even greater Colonel Bigeard, broke the Algiers terrorist network by using—what else—torture. He writes how this disgusted him, but he also chronicles its success. One by one they break and talk. Massu wins the first battle of Algiers, and after two years he wins the second. The heads are all dead or in jail. Lieutenant Charbonniere, the chief torturer, welcomes a French underground communist who was helping the rebels: “Ah, here is our client. You’ve heard about it, you’ve written about it, now you’re going to experience it.” He is talking about the “gegene,” the pincers the red beret paras of Massu attached to a person’s genitals.

After the final victory of Algiers, the war was lost back in Paris. Algiers was safe but Algeria was not. The Fourth Republic, headed by dreadful self-satisfied cowards, collapsed and De Gaulle came to power. He betrayed the army but not France. The paras had won a useless victory. I knew and admired Massu—he was mad about tennis—but my hero was and is Bigeard, the idol of Dienbienphu and Algiers, many times wounded but impervious to pain or death. He only died recently.

Morgan’s descriptions of the Casbah and the sweetness of life in Algiers are superb. I visited this miserable country only eight years after independence. The place was a dump, poor and sad, the magic and mystery gone. Many friends of mine, Jean Claude Sauer, Guy de Rougemont, Pascal Busson, Kim d’Estainville and many others had fought there. And won. When the picture The Battle of Algiers was reissued not long ago, Morgan meets the man, Yacef Saadi who gave away the last holdout, Ali la-Pointe. Saadi was never tortured yet took full credit for the film as he helped Pontecorvo give the movie its gritty sense. Bigeard appears as Colonel Mathieu. I highly recommend the book to American military leaders in Afghanistan, better yet to the idiots back home who have sent them there.

And as I’m writing about books, don’t miss Piers Paul Read’s The Misogynist. I first read Piers back in 1972, in Alive

. I knew one of the young men who survived the Andes crash. I’ve read Read ever since and his latest novel is all about modern life—memory, sadness, mourning, self-examination, and forgiveness. It made me feel good after the sadness of reading about Algiers. Reading, of course, is the antidote to seeing shrinks. If someone had told me that reading about how a friend, Andrea von Stumm, overcame the ravages of alcoholism in a mountain clinic, I would have bet my life that I would never read pass the first page. Yet I read One Hell of a Paradise

in one sitting, published by Quartet. (My own publisher.) Stumm, whose father fought in Stalingrad, writes like a dream as well as for Takimag. Read on.