Once Upon a Time on the Riviera 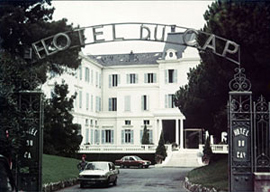 A recent libel case won by Lady Moore, wife of Sir Roger Moore of James Bond fame, called for my testimony in London, and for once I was happy to oblige. Roger Moore is a friend of very long standing, as is his son Geoffrey, who lives fifty yards away from me in Gstaad. British hacks are notorious for never allowing facts to get in the way of a good story, but in this case the Daily Mail paid dearly for involving the wrong Kiki.

Let’s go back 54 years, when a very young (20) Taki arrived on the French Riviera and was extremely lucky to hook up with the prettiest Swedish girl by far in what Somerset Maugham called that “sunny place for shady people.” Her name was Kiki, she was 16 or 17, and she moved in with me in a tiny room without bath in the Hotel du Cap, made famous by the great F. Scott Fitzgerald as the “Hotel des Etrangers” in Tender is the Night.

“It may sound like an empty life, but it sure was fun.”

After two or three weeks of unbridled passion, all hell broke loose. I opened up Kiki’s bag looking for cigarettes and found a wad of francs worthy of a drug dealer and then some. Under vigorous interrogation, Kiki admitted that it was a gift from an older man, a disgusting individual of unknown origins. Our love affair ended on a sour note, although Kiki went on to marry one of the richest Americans and then take him to the cleaners. I wrote about our ill-fated romance a couple of years ago in the London Spectator. As luck would have it, a gossip columnist read it, put two and two together, and got five. He figured my Kiki was Roger Moore’s Kiki and ran the item, greatly embarrassing the Moores, certain that the two Kikis were one and the same. (I hadn’t revealed Kiki’s surname in the original article.)

When I testified that I met Lady Moore 40 years after my Riviera idyll with Kiki the Swede, it was only a matter of how much Roger and his Kiki would accept for being libeled. (I hope it was in six figures.)

In the meantime, the Hotel du Cap got a lot of good publicity, which is the bad news.