One Night in Poland 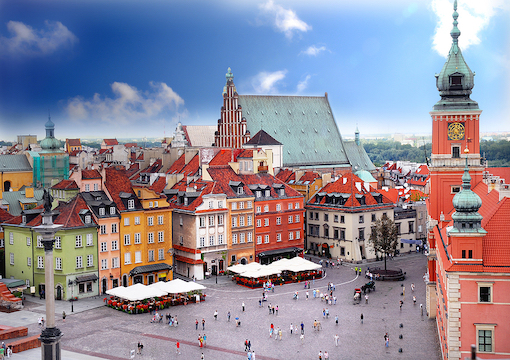 Do any of you remember the time when everything took place on terraces and outdoor cafés? Before everyone retreated into laptops and mobile telephones and Twitter? When possibilities flickered through the streets and the potential of new encounters was everywhere? Well, that’s all gone now, thanks to some pretty ugly-looking fellows with names like Dorsey and Zuckerberg, but we’re the ones who adopted their useless inventions and live by them as if they were the Sermon on the Mount. The social consequences have been devastating—the young make noises instead of articulating speech—and had Cassandra been around twenty or so years ago she would have warned us against tech companies that have the power to change our way of life.

Never mind. What’s done is done, and there are always books to remind us what the world was like before lookers like Bezos took over. My friend Leopold Bismarck is always slipping me books that make me want to shoot anyone, and everyone, from Silicon Valley. He even found one about Hemingway that I hadn’t read, which was like discovering the beautiful daughter of a farmer while looking for a needle in a haystack. Bolle’s latest gift is a book-diary written by his cousin, Hans-George von Studnitz, a diplomat who survived horrific bombings in Berlin—both his country seat and city house were totally destroyed—as he chronicles the key events of the war from 1943 to the end. What emerges in the diary is the terrible devastation and loss of life from the Allied bombings, but also the dignity of Berliners in the face of disaster. But what makes his opus sparkle is the portrait of the upper-class set he (Studnitz) as a nobleman frequented, and a particularly glamorous Polish evening of Count Ciano, Mussolini’s son-in-law and Italian foreign minister.

“There are always books to remind us what the world was like before lookers like Bezos took over.”

Galeazzo Ciano was an indefatigable seducer of women, whose perfect manners matched his skills with the fairer sex. Edda Mussolini, Benito’s favorite daughter and the best looker in the family, fell madly in love with him at first sight. Galeazzo was a bit greasy, in an Italian sort of way, but he was no perfumed popinjay, as his enemies referred to him. Executed by Mussolini for pursuing peace terms with the Allies, Ciano died like a man. He had been anti-Hitler from the start.

Just before war broke out, Ciano and his wife visited Warsaw, where a Polish colonel asked the couple if they would take supper with him in the regimental mess. After supper the colonel asked Countess Ciano whether she would care to dance. When she said yes, the curtains were drawn aside to reveal a jazz band and eighteen Polish officers in full dress uniform. As the band began to play, eighteen Polish officers bowed and simultaneously asked her to dance. Edda then got up and danced with each and every one of them. She called it the most romantic and dashing evening ever. Leave it to the Poles to have achieved it.

After Ciano’s death, fascist diehards and the Nazis were eager to get their hands on his diaries, kept by Edda. Her lover, the brave nobleman-pilot Emilio Pucci, guided her through the snows over Cervinia into Switzerland with diaries intact. Edda lived to a ripe old age, as did Romano, her younger brother. Emilio Pucci befriended me in 1958 in Gstaad, where we both skied and partied and talked nonstop about sailboats. Emilio by then had become world-famous for his fashion designs, and although I prodded him incessantly about Edda and her circle, he was a true gent and never spoke a word. Later on, in September 1944, central Vienna was bombed to smithereens, including the Kaunitz mansion where Metternich had his office and where Dollfuss was assassinated, becoming the graveyard for my wife’s grandmother, whose young, just-married daughter, Princess Lichtenstein, was also killed. Such are the joys of wars that are mostly started by men.

Yep, even reading about such terrible times distracts one from the drudgery of today’s world, but there are also parties that remind one of how much fun life can be. The one I’m thinking of did not include yours truly, but word reached me when I lunched with my editor at Bellamy’s later on. Fraser Nelson attended Rupert Murdoch’s 90th birthday and was seated next to the birthday boy’s wife, my old friend Jerry Hall. I met Jerry forty years ago, when the tall young Texan—from by far the best state in the union—had freshly arrived in London. Jerry has never put a foot wrong in all these years as a model, mother, and good wife. Although I hadn’t seen her in many a year, she told Fraser that she loved my High Life column and was a Spectator devotee. Rupert, needless to say, saved British newspapers and established a worldwide network of news, television, and film envied by jealous hacks not good enough to shine his shoes. Jerry Hall came after the Chinese disaster and has made him very happy. As she has poor little me by paying my column compliments. Next week I will tell you about a dinner I gave and the beautiful girls who attended.