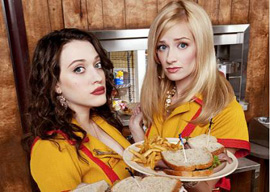 That’s how not one, not two, but three professional media-watchers headlined their stories about a recent press panel promoting the CBS sitcom 2 Broke Girls.

Nope: A gay Irishman mocked a straight Irishman for asking why the former’s show made fun of blacks and Asians.

I haven’t followed an American sitcom since News Radio, so here’s what I’ve pieced together about 2 Broke Girls: It was co-created by Whitney Cummings—she’s vaguely funny and not hideous, so let’s give her two development deals!—and that gay Irishman above, Michael Patrick King (whose credits, you won’t be surprised to learn, include Will & Grace and Sex and the City). The titular gals work in a Brooklyn diner (the “sit” in the “com”) but dream of opening a cupcake boutique. And they own a horse.

“They’re mad about the hipster jokes.”

The critical consensus is that 2 Broke Girls would be funnier (or at least less—cough!—objectionable) if it jettisoned its “offensive” supporting characters:

It’s a little baffling that a network sitcom in 2011 doesn’t bat an eye at rolling out a Chinese manager from the Mickey Rooney School of Oriental Sensitivity, a greasy Eastern European chef who ought to be toting a machine gun behind Alan Rickman in a 1980s action movie, and a wizened African-American man who I guarantee will bust out at least one bona fide Magical Negro moment this season.

So now you’re thinking: Hey, when is this show on again?

(If you’re like me, you have John Derbyshire’s classic “When Foreigners Were Funny” bookmarked. You watch poor-quality uploads of Tough Crowd on YouTube. Your nieces and nephews think you have a form of Tourette’s which forces you to bellow, “That could never get made today” every twenty minutes.)

Well, don’t get your hopes up. I watched clips of 2 Broke Girls for this story. I didn’t laugh. Now if only they could harness the unintentional hilarity at that “ugly” press panel…

After one concern troll too many asked King whether he’d ever tone down the show’s “racist” stereotypes, he snapped, “I’m gay! I’m putting in gay stereotypes every week! I don’t find it offensive, any of this. I find it comic to take everybody down, which is what we are doing.”

One critic “leaped in at this point” and asked King if he really thought that gave him a free pass to insult other minorities.