One Cheer for Meritocracy 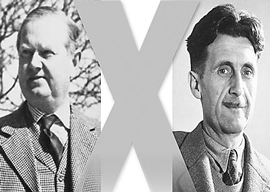 I have just finished reading David Lebedoff’s 2008 book The Same Man: George Orwell and Evelyn Waugh in Love and War. No, this isn”t a book review”it’s a bit late for that”only some loose reflections on what Lebedoff wrote, as it relates to our present circumstances.

Orwell and Waugh are the two big names in 20th-century Brit Lit, at any rate if you take the short version of the 20th century, from 1914 to 1989. They were both born in 1903, a few weeks apart. Both sprang from the “lower-upper-middle class” (Orwell’s phrase): Waugh’s father was director at a publishing house, Orwell’s an Imperial civil servant. Both famously wrote novels; both also wrote masses of fugitive journalism”essays, book reviews, social commentary. Waugh’s Essays, Articles and Reviews and Orwell’s Collected Essays, Journalism and Letters gather it all up. Orwell also wrote some poetry, but it’s not very good.

Those parallels aside, they were completely different types. Waugh was a reactionary, a social climber and snob; a dandy, a clubman (White’s, the oldest of the London gentlemen’s clubs), a champagne drinker and cigar smoker, and a convert to Roman Catholicism (at age 26). The snobbery and Catholicism can be found in concentrated form in Waugh’s 1945 novel Brideshead Revisited. Of the novel’s 1982 TV serialization in the U.S.A., British critic Edward Pearce had this to say: “If America salutes Brideshead, the battle of Yorktown will have been a wasted effort.”

“Whether any of our proconsuls in Baghdad or Kabul have been served up the stewed flesh of a significant other, I don”t know, but I wouldn”t be very surprised.”

Orwell was a loner whose social climbing was downward, into the company of proles and hobos. He called himself a socialist, dressed shabbily, drank ale, rolled his own cigarettes from cheap tobacco, and had no religion. His best-known book is Nineteen Eighty-Four, a fantasy of totalitarianism.

So why are they “the same man”? Lebedoff argues that in the first place they both believed that one must choose decisively between this world and the next. Orwell, who did not believe in an afterlife, chose this world, sought its improvement, and found moral inspiration in the decency of ordinary people. Waugh had his sights on the next world, and so could treat this one as an arena of imperfection, folly, and comedy. He took his morality from the Church.

And then, both looked forward into the world of the later 20th century, and did not care for what they saw.

What they mainly saw was meritocracy: the rise of an exam-passing elite. Readers of Nineteen Eighty-Four often miss this aspect of Orwell’s imagined society, with all its cruelty and oppression.

Admission to either branch of the Party is by examination, taken at the age of sixteen. Nor is there any racial discrimination … Jews, Negroes, South Americans of pure Indian blood are to be found in the highest ranks of the Party …  If there were no other way of keeping the ablest people at the top, it would be perfectly prepared to recruit an entire new generation from the ranks of the proletariat. [Chapter IX]

Waugh vented his dislike of meritocracy in his 1932 novel Black Mischief. The hero is young Basil Seal, a graduate of Oxford University, where he “had enjoyed a reputation of peculiar brilliance among his contemporaries … He had travelled all over Europe, spoke six languages, called dons by their Christian names and discussed their books with them.” Basil is assigned to modernize the African nation of Azania, with dire results. His girlfriend, for example, ends up cooked in a stew, from which Basil unwittingly eats.

As both writers foresaw, meritocracy has come upon us. We don”t, thank goodness, have it in the pathological form that Orwell described, although some elements of the current political correctness regime strongly resemble Orwell’s vision. Those of us who write commentary on social topics, especially on matters of race and sex, have to keep checking ourselves to stop overusing phrases out of Nineteen Eighty-Four: “Thought Police,” “crimestop,” “Two Minutes Hate,” and so on.

Waugh was closer to the truth with Basil Seal, whose Azanian fiasco is not so very different from U.S. adventures in Vietnam, Haiti, Iraq, and Afghanistan. Recall the title of David Halberstam’s book about our early Vietnam policy: The Best and the Brightest. Whether any of our proconsuls in Baghdad or Kabul have been served up the stewed flesh of a significant other, I don”t know, but I wouldn”t be very surprised.