One Man, One Vote, One Catastrophe 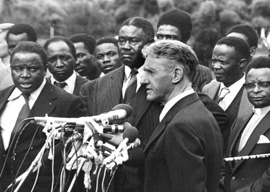 As a white man born and bred in Rhodesia (now Zimbabwe) who has watched events unfold both in my home country and in the African subcontinent, I look at the United States and Western Europe with a sense of having seen the same horror movie before. I fear my fellow palefaces abroad are rapidly heading for second place like we did, and for many of the same reasons.

Rhodesian Prime Minister Ian Smith pleaded with an unsympathetic world to understand his call for a qualified franchise based on merit and not race. He told his multitude of detractors that universal suffrage was a recipe for disaster in a polity where the vast majority had only recently been discovered in a very primitive state before being suddenly exposed to Western Civilization with all its complexities and alien systems and values. He insisted it would be disastrous to rush the process. He asked for time to educate and inspire the populace to take their place in a sophisticated democracy, but he was universally damned. Just as he feared, a flawed election followed in 1980 under the auspices of a Thatcher-led British government. Robert Mugabe and his criminal cabal, poorly disguised as Freedom Fighters, assumed power and a catastrophe began to unfold.

“Just as Mugabe rose to power on the back of a dumb electorate and a conniving media, so has Obama.”

Now many Americans and Europeans are having to confront the same paradigm. As the demographic winds of change blow stronger, the number of illiterates and itinerants grows at an alarming rate. Those that contribute the least to the common good seem set to seize and retain power at the expense of the minority that contributes the most. All this is thanks to the seemingly sacrosanct principle of “one man, one vote.” But just as in Rhodesia, that minority dares not voice its displeasure at this development for fear of being condemned to the special dungeons reserved for those committing the cardinal sin of “racism.” And they can be sure of this punishment because of the mainstream media, which so cunningly manipulates the minds of the millions of simpletons who have the vote and therefore the power to elect those who will serve their destructive purpose.

It was a media cut from the same cloth that broadcast to the world a compelling, biased, and bogus story about white brutality and “racist” abuse of power and won the world to their destructive cause. Desperate appeals from the minority whites in Salisbury to be given an opportunity to present their case were ignored. The media bullyboys had the “colonials” by the throat and went for the jugular; this was simply a story about white villains and black victims and there was no need to know more. Leading this charge of the misinformation brigade were the men and the women of the BBC, who went beyond the call to destroy Africa’s best governed country.