One Nation Under a Bus 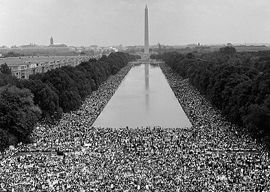 As temperatures drop, the nights grow longer, and America careens toward another round of elections, it’s hard to believe it was only two years ago that Barack Obama had cobbled together a coalition of minorities and self-hating whites formidable enough to propel his skinny, inexperienced, brown-paper-bag-colored ass into the White House. His candidacy inspired a level of political energy not seen in America since JFK, and his supporters displayed such an enthusiastic sense of shared destiny, it would not be inaccurate to describe them as some sort of nation.

Then, the moment Obama was elected on little more than his frappuccino skin tone and thin-air promises that he”d change things, this progressive coalition displayed the same triumphalist arrogance of all bullies, although with an added unsavory Revenge of the Nerds sense of intergenerational payback. There was rampant boasting of a permanent progressive majority and of history being on their side. They viewed themselves not only as a nation; they were suddenly the nation.

Ironically, this new “majority” was almost entirely comprised of minorities, whether racial, sexual, religious, or ideological. Even the whites who put Obama over the top comprised a minority within American whitedom. My entire life, and with some sympathy, I”d watched all such minorities rail against majorities” cruel tendency to prey upon and undermine minority interests. Then, the moment it appeared that this patchwork rainbow quilt of the eternally aggrieved actually were the majority, it was all, “Nyah-nyah, you lost, we won, suck up your defeat and quit your whining, your time has come and gone, we”re in charge now, we won by a landslide, and we”re going to act every bit like the bullying mob we always accused you of being.” Their ceaseless gloating about white-male dispossession and obsolescence dried up whatever sympathy I may have previously had for them.

Two years later, it’s clear that the bus which drove that curious pseudo-nation is running on flat tires and gas fumes. Nearly every move Obama has made since his inauguration reveals him to be a clueless neophyte rather than the political genius even his detractors perceived him to be. Blacks and the young, two of his core constituencies, have suffered disproportionately from job losses. Many of his well-meaning white supporters are also worse off economically than they were two years ago. No doubt, many are also scratching their heads at the fact that Obama embodies the antithesis of post-racialism. The gays, as is their wont, also feel betrayed by him. So do the peaceniks who are baffled that he’s ramped up the Afghan war. And several far-left oddballs are moaning that he’s not radical enough. The only thing that still unites all these groups is a bitter sense that Obama has thrown them under the very bus that drove him into the Oval Office.

For evidence of this collective disintegration, look at October 2nd’s flat, limp, listless, lackluster, moribund “One Nation” rally in D.C. and compare it to the messianic electricity of 2008’s left-leaning rallies. It’s akin to looking at those before-and-after “Faces of Meth” mug shots. The thrill is gone. The circus-like magic has evaporated, and all that’s left is a bunch of clowns.

In late August, portly libertarian broadcaster Glenn Beck and his perfectly spherical pink testicles hosted a rally on D.C.’s National Mall that was intended to, I don”t know, restore God’s busted hymen or something. Although the “One Nation” rally’s organizers claim they began planning their shindig long before Beck’s rally and thus weren”t staging a counter-event, NAACP prez Benjamin Jealous and MSNBC’s apoplectic blowhard Ed Schultz both predicted their hootenanny would easily draw a larger crowd than Beck’s.

You see, in claiming bragging rights to whose nation this nation actually is, it all boils down to being a size queen. That’s how democracy works.

Although a major theme was the need to end “divisiveness,” rally-goers drew a thick dividing line between themselves and the Tea Party middle Americans whom they consider their natural enemies.

The “One Nation” rally claimed sponsorship by over 400 groups. Big Labor weighed in heavily, including several large government unions. An estimated 47 “identity politics groups” were also reppin” at the event, most notably the NAACP and the National Council on La Raza. The air also carried a whiff of hummus, as attendees toted picket signs stating emphatically that it is “NOT OK To Bash Muslims” (as if anyone, anywhere had been claiming it was OK) and that some imaginary country called “Palestine” was being occupied by filthy Zionist slavemasters.

And for anyone who scoffs at the notion that the modern Democratic Party has been infiltrated by socialists, kindly skip over this paragraph before reading any further: Attendees at “One Nation” included the Communist Party USA, Democratic Socialists of America, the International Socialist Organization, socialistalternative.org, Socialist Party USA, Socialist Appeal, National Conference on Socialism, socialistworker.org, Democratic Socialists of America, socialismandliberation.org, Socialist Workers Campaign, and, proudly waving a red flag with a hammer and sickle, the U.S. Marxist-Leninist Organization. Che Guevara’s face was everywhere. The raised clenched-fist symbol”basically, the communist “Sieg Heil””was ubiquitously displayed on signs, T-shirts, and literature. Although the “One Nation” website originally listed many of these groups as sponsors, they have since purged that page of any group with the word “communist” or “socialist” in its name.