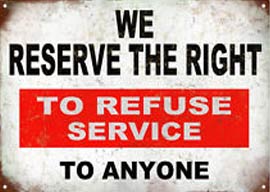 Last Wednesday, Arizona’s lizard-skinned Governor Jan Brewer vetoed what had largely been described as an “anti-gay bill,” even though the bill’s text doesn’t mention homos at all.

The luridly self-righteous cultural left, which long ago eclipsed social conservatives in their unhinged sense of shirt-rending, chest-thumping moral hyperbole, had described the law as shameful, disgraceful, horrifying, and hateful. Fanning the faggoty flames of fear, they warned that if the bill passed, it would usher in a new era of “Jim Crow for gays” and possibly even a homosexual Holocaust.

As far as I can tell, the bill only intended to allow business owners to refuse service to anyone if it violated their religious convictions. And as far as I feel, anyone should be able to deny service to anyone for whatever reason pleases them. If you only want to bake cakes for Filipino Satanists, that should be your choice. Some might think it’s a bad business decision, but a possible upside is that you’d corner the coveted Filipino Satanist cake market.

It is thought that the bill was inspired by a recent rash of high-profile cases in other states spurred by gays and lesbians who’d been denied service and decided to take the matter into court rather than to another shop down the block. This included a New Mexico wedding photographer who’d declined to shoot a lesbian couple’s commitment ceremony, as well as bakers in Oregon, Colorado, and Iowa who said their religious beliefs prevented them from baking gay-marriage wedding cakes in good conscience.

I was reminded of a 2008 case in New Jersey involving one Heath Campbell, a self-described Nazi festooned in swastika tattoos. The case involved not a wedding cake, but rather a birthday cake for his three-year-old son, cuddly little Adolf Hitler Campbell. A worker at a ShopRite supermarket refused to squeeze out the words “Adolf Hitler” onto the cake in sugared frosting, leading Campbell to get his Hitler birthday cake at a local Walmart, which subsequently promised to review its “cake policy.”

Shortly after the Nazi cake hubbub, authorities seized his newborn daughter Eva Braun Campbell. At last count, Campbell has fathered nine children with five different women but has custody of none of them. Campbell insists that authorities keep seizing his kids because he’s a Nazi, while authorities claim it’s due to reports of family violence. Campbell is also reportedly unemployed and receiving disability, so it’s doubtful that were he alive, Adolf Hitler would consider him a role model. And that recalls an exceedingly tasteless joke I once heard where Mussolini shows up unexpectedly at Hitler’s doorstep, at which point Der FÃ¼hrer says, “If I knew you were coming, I would have baked a kike!”

Why be a noodge and go where you’re not wanted? Is there no end to such incivility?

What if I went into a sign-making shop in San Francisco’s Castro District and ordered a 20-x-10-foot sign that said SODOMY IS AN ABOMINATION? I”d be a jerk, that’s what.

What about the comedian who went into a black dry cleaner’s shop in Los Angeles and asked him to clean his Klan outfit?

What if an Orthodox Jewish caterer was asked to spit-roast a pig?

A case in Canada pitted a Muslim barber who refused to cut a lesbian client’s hair due to Islamic proscriptions against touching lesbians…or something. Rather than seeking out a willing lesbian barber”this is Toronto, after all, and I’m sure it’s filled with eager lesbian barbers willing to make a honest buck shearing their cohorts”she went crying to the Human Rights Tribunal of Ontario.