One World, One Song 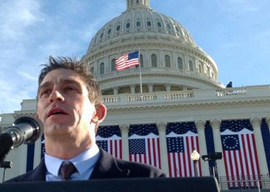 Inauguration Day is a grand national spectacle, seen by the whole world! The nation puts forward its best! State-of-the-art security, troops marching in perfect formation, the very latest in ladies’ fashions, patriotic songs sung (well, lip-synched) by the nation’s best-loved voices, stirring rhetoric from mature speechwriters freighted with the wisdom of the ages…yes, this is the USA showing off our best.

Why not have a poem read at the ceremony? You’d want it to be something stirring and uplifting, and by one of our best poets of course. Such a work can echo down through the ages, defining a moment in the life of a nation. Think of Horace’s triumphal odes or Kipling’s “Recessional.” There are precedents: four inaugurations (1961, 1993, 1997, 2009) have included poets reading their verses.

Hold up there just a minute, though. This word “best” that I’ve been throwing around: Isn’t it kind of invidious? Judgmental? If some poet were best, wouldn’t that mean the rest of us are…inferior? (Gasp! Swoon! Smelling salts applied.) Instead of using these arbitrary, normative standards, should we not base our selections on what’s really important”which is to say, as every authority figure in our culture from academics to generals has told us, on diversity?

“I am now ready to say that 99.9 percent of free verse is worthless crap.”

OK, let’s get a black poet out there. No, wait: been there, done that. The 1993 and 2009 poets were both black, or at least black-ish. In any case, the black thing is kind of passÃ©, what with a black president and all. America’s future belongs to the Hispanics”didn’t the vice president tell us so? The poet should be Hispanic, then. And oh, those black-ish poets were both gyno-Americans, so this one better be a male, a Hispanic male.

We’re not there yet, though. We need to pack a little more diversity into our choice. Hispanic is OK, but male? Yeccchh! Wait”how about a gay Hispanic male”a twofer? That’s the ticket! We got any gay Hispanic male poets? Send emissaries to the four corners of the land!

And so the nation of George Washington and Ulysses S. Grant, of Henry Wadsworth Longfellow and Mark Twain, of Daniel Boone and Neil Armstrong, found itself on Monday, in between the president’s inaugural address and the benediction, looking at a homosexual of Cuban ancestry named Richard Blanco.

(Just a quibble here. Why, when we’re told that some bloke is homosexual, are we not told what kind of homosexual he is? I mean, you know, pitcher or catcher, giver or taker, bugger-er or bugger-ee, fudge-tamper or mattress-muncher? If we know from the subject’s testimony or from observation of his dating habits that a man is straight, then we know who’s doing what to whom. Why should we not be vouchsafed the same level of information on homosexuals? Although if I have been correctly informed that the gripe heard most often around gay bars is: “A hundred bottoms looking for a top,” then the issue may be moot. End of quibble.)

And please don’t think that Blanco is one of those old-style Cuban-Americans, the ones that hate Fidel Castro. Heaven forbid! Richard Blanco is progressive.

So what does he have to tell us, this gay caballero, this butt-bandit bard, this sonneteer of the shirt-lifting sodality (or, depending on precise preference”see above”this pillow-pounding poet)? Check it out.