Only in New York 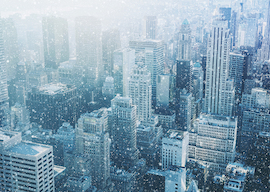 What I should have done is gone out and bought a lottery ticket. I’ll explain: The snow suddenly came down in buckets, icing the city and bringing gridlock like I’ve never seen before. The traffic cops in the Bagel are all Hispanics, to a man and to a woman around four feet tall, and all weigh over 250 pounds. The moment the white stuff started coming down they left their posts and headed for their casas. Bagelites went through red lights, honked their horns, some even abandoned their vehicles and went for a coffee break.

I was on my way to a premiere of a documentary that I won’t name because (a) it was total crap, and (b) it was an anti–Rupert Murdoch diatribe that was as predictable as it was badly presented. I had dressed to the nines in order to stand out among the left-wing beards I was certain would be attending. My destination was the Paley Center, on Fifth Avenue and 52nd Street. I was in a taxi whose driver hardly spoke English but was polite, like the good Bengali very few of them are. I had been in the cab for about ten minutes without moving when someone began knocking on the window.

When it finally slid down, spilling the white stuff inside, a woman whose lips had turned blue and who was not bad-looking—but no beauty—asked me in a tremulous voice if she could share the cab with me going down Park Avenue. “I’ll share the cost,” she said. “You don’t need to, do come inside,” said I, ever the shining knight. “Are you English?” she asked. “Not exactly,” I answered. “You sound foreign, are you a diplomat?” “Nah, just a struggling writer,” said I, beginning to regret my having rescued a lady in distress. “Oh, my father was a writer. He owned Grand Street, but he died some time ago.”

“‘Do come inside,’ said I, ever the shining knight.”

After a second went by, I said: “I knew your father and I was in school with him seventy years ago, he had the cube next to me in Thomas House, Lower School at Lawrenceville.” (We had cubes, not rooms, in a long narrow dormitory.) Lots of OMGs followed. Her name was Emma Sonnenberg and her father was Ben Sonnenberg, whose father started a thing called Public Relations long ago when no one had ever heard of such a thing. He obviously made a bundle, but having read Ben’s memoir of Lawrenceville, I knew he hated the place. “They hated him because he was Jewish,” said my passenger. “That’s a lot of BS,” I told her in no uncertain terms. “The reason everyone hated Ben was simple. We all went out for Lower School tackle football, even I, who weighed 100 pounds and was five feet tall and did not know the rules or had ever seen a football game in my short life. Ben weighed 200 pounds and was almost six feet tall but refused to try. So we called him yellow and beat the shit out of him the way 12-year-olds tend to do. We, at least I, didn’t even know what a Jew was.”

That calmed her down a bit. “He went to seven schools after Lawrenceville,” she told me. So I asked her, “Were they all anti-Semitic?” And it got better. It turned out that Emma had gone out with Steven Mailer, Michael Mailer’s brother, whom I was going to my premiere with. More Oh my Gods, followed by How can this be happening?, and so on and so on. As she was leaving the taxi on 58th Street she asked for my name. “Taki,” I told her. “Like Tacky?” she asked.

The documentary was so bad and the audience so full of hate for Fox News and anyone not very left-wing, I brushed my knee against the back of the head of some jerk cheering and laughing in the row in front of me. I walked out, went next door to 21 Club, had two bottles of red and a great big steak, and then walked home while the blizzard was still blazing. Then I figured out the odds of having someone ask for a ride whose father I had lived next to seventy years ago, and thought for a second of buying a lottery ticket. But of course I didn’t, and then the snow melted and it’s all slush now.