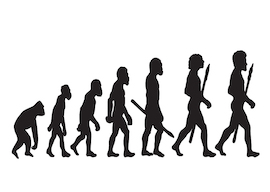 Let’s begin 2019 with some truths and a few admissions: We humans have been evolving for some time now, but not really. Only a few decades ago we were certain that the oldest human fossil was a small-brained female by the name of Lucy. Lucy was known as Australopithecus afarensis, and she had existed from about 3.85 million years ago to about 2.95 million years ago. Human evolution, it is believed, took a direct path from Lucy to modern woman—for example, Paris Hilton and Kim Kardashian, both direct descendants of Lucy. Lucy was tiny, while Paris and Kim are not, and it seems that the latter’s brains have shrunk disproportionally to their stature. Here is where science and human evolution become confused. The brains of Paris and Kim should have grown proportionally to their breasts, but shrunk instead.

The #MeToo movement is also a direct descendant of Lucy, but although the former has grown physically much larger than the original, the brains have remained as small, if not smaller, than those of Lucy. This puzzles scientists almost as much as it does paleoanthropologists, and frankly it also baffles yours truly. How can some women be so quick to seize an opportunity to get publicity and money, yet possess a brain as tiny as that of sweet old Lucy? Some scientists insist that the bigger the breasts, the smaller the brains, but this theory has been disproved time and again, especially in experiments conducted in the Groucho Marx–Bob Hope Institute of Human Evolution.

“Mine is a scientific attempt to find a solution to our never-ending quest as to who we are and where we came from.”

Please don’t laugh, take this seriously. Mine is a scientific attempt to find a solution to our never-ending quest as to who we are and where we came from, and I shall begin with a Homo—don’t get me wrong, I mean Homo the first man. The first Homo was taller than man today and had very long legs for running and very long arms. Homo would have been a No. 1 choice for the NBA, but the basketball league did not exist back then. Eventually, the early Homo gave way to our very own Homo sapiens. Which means Lucy was not the first female species, but only a branch in our family tree. How did I arrive at this conclusion? Easy. I read the Bible.

Now researchers have found fossils that prove Lucy was not the first species in our hominin evolution because these fossils date back 6 million years. American feminists are disputing these findings, but then they would, wouldn’t they? Australopithecus, whose many descendants I see on TV all the time—especially on the news and sports channels—eventually gave way to Neanderthals, most of whom I also see on TV, especially during reports from the Middle East. The best-preserved Neanderthal, not as a drawing in the Museum of Natural History, is a good friend of Jared Kushner’s and calls himself Mohammed bin Salman. The bootlicking media refer to him as a prince, which is like calling a poisonous snake cuddly. Australopithecus and Neanderthal mixed for a while, especially in the Middle East, and they also mixed with camels, producing the first Saudis. Many of their descendants are now based in Washington, D.C.

Neanderthals existed around 300,000 years ago, and they continued to live in areas across Europe and Asia until 40,000 years ago. Some insist that pure Neanderthals still exist in many parts of the globe even after they began to mix with Homo erectus, our direct ancestors. As proof they point out the existence of a CNN reporter called Acosta, and a rapper by the name of 6ix9ine. Homo floresiensis was discovered in Indonesia and was three feet high and had brains even smaller than that of Homo naledi, a species with smaller brains than Lucy. Homo naledi evolved into Homo Hispanicus, which spread all over the southern hemisphere and eventually settled in Southern California and New York City. They grew horizontally rather than vertically, and are employed as traffic wardens in New York and sometimes even as mayors—Mike Bloomberg is three feet—and coca distributors in Hollywood.

As it turns out, we have had our planet to ourselves only these past 40,000 years. Homo sapiens have been around much longer than that. So I’d like to know who else was around before that. Although he looks like an extraterrestrial, Jeff Bezos assured me that his family had no connections with the first Homo sapiens, and he also said that having $150 billion is proof that there is no cure for baldness. But Bezos sure looks like one of those hominins that we outlasted or outcompeted 40,000 years ago. Another genome, known as Zuckerbergin, has an outsize brain, but it’s programmed to deceive and steal. Finally, Homo Americanus and Homo Europeanus are two species expected to become extinct by the end of this century due to the multiplication of Homo Hispanicus and Homo Africanus. As my old professor Darwin told me long ago, “It’s the survival of the fittest, dear boy.”