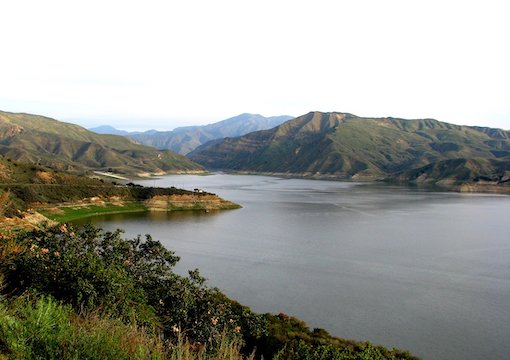 The Grampa Simpson “old man yells at cloud” meme is funny, to be sure. But leave it to black folks to go it one better by screaming at a lake.

Last month, “Afro-Latinx” singer-actress Naya Rivera drowned while swimming in Lake Piru in Ventura County, Calif. Rivera had grown up in the area; the lake was not unfamiliar to her. It was an accident, and nothing more. Still, a black life was “taken,” so a petition was created to “cancel” Lake Piru.

“Lake Piru needs to go down. Now and forever. It’s taken too many lives,” brayed signatory Erin Jordan. “Naya Rivera and others deserve fucking justice. Nobody deserves to fucking drown or possibly be dead bc of this river,” bellowed Linnell Lilliston. Other comments: “Shut this shit down please.” “The lake shouldn’t have the right to be open anymore.” “Shut this place down!!!” “This lake is very dangerous and a threat to people. Not a single death more.” “This place should be drained.” “Use it for drinking water or drain it completely.” “Shut down Lake Piru for good.”

Many of the 4,400 signatories simply chimed in with “justice NOW!” or “where’s the justice?” or “we need justice!”

How one can extract “justice” from a lake is unclear. What is clear is that the notion of yelling at clouds seemed ludicrous until a bunch of low-IQ lunatics began doing it for real.

A step up from demanding justice from a lake is demanding it from a tree. I mean, at least trees are living organisms. Robert Fuller was a crazy-ass black man in Palmdale, Calif. (well, to be fair, all of him was crazy, not just his ass). Beset by mental illness, the poor bastard hanged himself from a tree outside the Palmdale City Hall on June 10. Fuller had a history of auditory hallucinations, institutionalization, psychotic outbursts, and suicide attempts. He used his EBT card to buy the rope he employed in the hanging (from a Dollar Tree, noch). It was an open-and-shut suicide, but in the fantasy world of BLM, it was a “lynching,” and hundreds of angry protesters besieged city hall for days on end, chanting, yelling, and at one point attacking the sheriff’s department, pounding on doors and walls, screaming for “justice.”

Eventually the mob decided that the only way to extract that justice was to kill the tree. Now, the idea of executing a tree for a hate crime might seem funny to you, but it must be remembered that the average tree is the intellectual superior of the average BLM thug. Brian Hashimoto, a far-left local artist and photographer who offers his services pro bono to BLM in order to “amplify melanated voices” (he states that with deadly seriousness on his website), documented the attempted vigilante justice against the genocidal tree (again, speaking without a hint of awareness of how insane the situation was):

At one point someone appeared with a chainsaw and announced he was going to cut the tree down. The crowd chanted in support. There was a lot of tension in the air. Those of us with cameras were asked to put them away so that no one would be documented in the act. But a friend of the family stepped in and shouted down the chanting and declared the family did not want this and it could interfere with the newly announced state investigation. That this would not bring justice. She stepped in front of a chainsaw and an impassioned, rightfully angry crowd of hundreds and directed their energy back to the streets. It was an incredible moment. The grief, the anger, the pain, the bravery, the respect, all of it. #blacklivesmatter #justiceforrobertfuller #nojusticenopeace #amplifymelanatedvoices

The bravery, the respect. A bunch of certifiable cretins arguing over whether to kill a racist tree or let it live so that it could assist in a pointless investigation into a nonexistent lynching. Literally, a heated debate over whether to extrajudicially execute a villainous tree or turn it over to authorities. In America 2020, this is what passes for a Great Moment in Black History.

By the way, Palmdale is not far from Lake Piru. I don’t know about you, but I’m thinking collusion between the tree and the lake.

“Innovating a new ‘no explosives needed’ type of suicide bombing might just top the traffic light on the list of groundbreaking black inventions.”

Thankfully for Palmdale, the evidence proving Fuller’s death by suicide as opposed to invisible Klansmen was so strong, the protests eventually subsided (plus, the contrite tree made a $50,000 donation to the BLM legal defense fund). A week later, when another black man, Malcolm Harsch, was found hangin’ from a tree in Victorville, Calif., the same hysteria followed (Victorville blacks used their EBT cards to buy the torches and pitchforks). But in that instance, Harsch’s family quickly doused the flames by explaining that Malcolm’s suicide was caught on security camera (infrared, so as to detect invisible Klansmen).

It occurred to me that the BLM mob is so predictable in its gullibility and bloodlust, a suicidal black man looking to take his city down with him could easily fake lynching evidence before hanging himself (“defensive wounds” on the hands, text messages about “some cracka be followin’ me”), knowing that dozens would die in the resulting riots. Innovating a new “no explosives needed” type of suicide bombing might just top the traffic light on the list of groundbreaking black inventions.

Of course, there are some very non-suicidal folks—Democrat operatives—who think they can control and “guide” the mob. Vox’s Matty Yglesias is one of the most mediocre thinkers on the national political stage today. But it’s his dim-wittedness that makes him interesting. He’s too dumb to stay on point, too dense to know what he’s “supposed to” say. Every now and then, he tweets things that challenge leftist orthodoxy or, worse, give away too much of the game. That’s why he routinely nukes his entire feed. And right before deleting his entire feed (again) on July 7, he tweeted this frighteningly honest appraisal of how the Democrats could capitalize on the riots:

Wide open lane for Biden to argue explicitly (and accurately) that it’s Trump’s approach to governance that is fueling left-wing radicalism and the cure is to elect a normal president & congress.

In other words, “As long as Trump is president, our BLM and Antifa allies will continue to wreak havoc. Get rid of Trump, give us the Senate, and the ‘left-wing radicalism’ problem will vanish.” I don’t think Yglesias has the cognitive skills to comprehend how balls-out cynical that strategy is. In fact, it’s very Mafia-like: “Just do business with us, and your leftist thug ‘difficulties’ will magically disappear.”

But will the fanatics be as easy to control as Yglesias suggests? This mirrors a problem that’s long plagued Arab leaders. Muslim madmen make great shock troops, until they turn on you. After all, fanatics with purity tests and an inability to “agree to disagree” will eventually see even their benefactors as infidels in need of “cleansing.” Recent history is riddled with instances of Muslim suicide bombers killing “allies,” from incidents large-scale (the 2005 Amman bombings) to small (the 2011 killing of Vittorio Arrigoni, a.k.a. “Goombah Amy Biehl”). BLM fanaticism mimics Muslim extremism, especially Palestinian extremism, in several ways, from the belief that no body count is too high in the quest to reclaim what’s been “stolen,” to a willingness to sacrifice their children for the holy war (BLM purposely ignores, and even contributes to, the murder of “their babies” at the hands of other blacks, because opposing such crimes would disrupt their narrative).

But while Democrats think that they can channel the BLM sewage river to their benefit, some Republicans believe the opposite, that the riots will actually help Trump. Laura Ingraham articulated that point of view last week: “The inescapable conclusion from all that has been tolerated in liberal cities these last 10 weeks: If the Democrats win, the looters will know that they have free rein to attack not just every city and town in the country—but the suburbs as well. And that’s exactly what they’ll do.”

That’s a neat little talking point, but I’m not certain it’s effective. Telling voters that “if the Democrats win, the looters will have free rein” is kinda dependent on those voters being too stupid to realize that the looters have free rein right now, under Trump. I mean, what exactly have Trump, Barr, and the Senate Republicans done to stop any of the mayhem? For the GOP strategy of “If we’re out of power, we’ll no longer be able to protect you from the thugs” to work, the GOP needs to actually be protecting us from the thugs. And it isn’t. William Barr is no John Ashcroft (who put political correctness aside to root out potential terrorists after 9/11). Barr’s done precious little to protect us from the black terrorists of BLM or the white terrorists of Antifa. Trump and Barr have given the electorate no reason to say, “Boy, I’m sure glad these guys are in charge, otherwise there’d be nonstop carnage.”

As much as I hate to say it, I think voters might see things Yglesias’ way. Continued BLM/Antifa terror from now till November will help the Democrats. Voters, seeing Trump’s impotence and inaction, will instinctively think, “Maybe the Democrats, being the terrorists’ allies, are the only ones who can rein them in. Maybe if we put them back in charge, they’ll call off their dogs.”

Hell, if BLM’s reign of terror has proved anything, it’s that American whites are all too willing to accede to domestic terrorists’ demands, in the hope that acquiescence can bring peace.

All the left needs to do is continue to turn the screws for the next few months, and all Trump needs to do is respond by ineffectually tweeting “LAW & ORDER!” while doing nothing of actual value, and Biden will win. Meanwhile, the Trump faithful, obsessed as they are with the fantasy that their God King can win the black vote, will attack Biden and Harris for their former “tough on crime” positions (“They imprisoned black men! They called them criminals!”). So, we’ll have a bunch of moronic GOPs saying, “We’re not the ones who are tough on crime; Biden and Harris are tough on crime! Boo on them for being tough on crime!” and a bunch of Democrats saying, “Just dump Trump, elect us, and the ‘radicals’ will go away.”

And then we’d get to the really big question: Can the Dems call off the ghetto dogs and LARPing Jokers?

That I can’t answer. What I can say is that Trump and the GOP will learn nothing from their loss. They’ll sit around wishing that they’d pandered even harder to blacks.

I can hear Trump now, sulking after his defeat: “I shoulda drained Lake Piru. If I’d only done that, I’d have won.”

It would be an appropriately farcical end to a farcical administration.