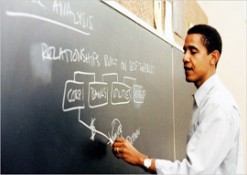 Have we ever had a president so disconnected from the heart of America?

On Friday night, at a White House iftar, the breaking of the Ramadan fast, Obama strode directly into the blazing controversy over whether a mosque should be built two blocks from Ground Zero.

Speaking as though this were simply an open-and-shut case of constitutional law, Professor Obama declared that Muslims “have the same right to practice their religion as anyone else in this country,” including “the right to build a place of worship and a community center on private property in lower Manhattan.”

Hailed by Mayor Michael Bloomberg, who also sees this as an issue of tolerance and religious freedom, Obama had poured gasoline on a fire that had him in headlong retreat Saturday morning.

“I was not commenting and I will not comment on the wisdom of making the decision to put a mosque there. I was commenting very specifically on the right people have that dates back to our founding. That is what our country is about.”

This is not a question of “Can they build a mosque near Ground Zero?”

It is an question of “Should they build a mosque in the shadow of the twin towers, where 3,000 Americans were suffocated, crushed or burned to death by Islamic fanatics whose Muslim faith was integral to their mission of mass murder and to their identity?”

Unless one is without kidney, spleen, heart or common sense, the answer would be “No!”

A decent respect for the opinions of one’s fellow Americans would seem to shout out: Put the mosque somewhere else. This is hallowed ground. This is a burial site sacred to the families of those who died, to New Yorkers, to all Americans. A Muslim mosque is out of place there.

Indeed, if, as backers claim, the purpose of this Cordoba mosque and community center were healing, reconciliation and harmony, it has failed in its purpose. It has already had the opposite effect, enraging and dividing the city and country.

Why would backers of the project press ahead when its purpose is impossible of attainment, unless the real purpose were to impose on the people of New York a mosque they do not want there.

With the president’s intervention, the issue has metastasized into a major clash in America’s religious and culture war. It has gone global, as Hamas has now weighed in on the side of building the mosque near Ground Zero.

“We have to build the mosque, as you are allowed to build the church, and Israelis are building their holy places,” said Mahmoud al-Zahar, a co-founder of Hamas and the organization’s chief in Gaza.

His arguments echo Bloomberg’s and Obama’s: We have the right and we Muslims must now move ahead with the mosque.

With America’s head of state enlisted on one side of this quarrel, and most Americans on the other, damage will be done to the national unity and there will be consequences for the president’s party.

So be it. For if the president believes the Constitution decides this issue with finality, he is profoundly mistaken. We were a country before we ever had a Constitution. We were a nation, born in the furnace of a revolutionary war. That infant nation wrote its own birth certificate, a dozen years after Lexington and Concord Bridge.

Three-in-four Americans profess a Christian faith. That reality is not changed because the Warren Court outlawed Bible reading and prayer in public school, ordered the Ten Commandants taken down from classroom walls, purged Christianity from our public institutions or denies to Americans their freedom to put Christmas creches in their public squares.

Islam is a rising faith, the largest on earth, with 1.5 billion adherents. It is a militant faith that believes it will one day encompass all mankind. It holds there is but one God, Allah, that his last and greatest prophet was Muhammad, that Islam, the path of submission, is the path of salvation. It believes that its sacred book, the Koran, should inform the culture, that Sharia should be the basis of civil law.

Where it has become the dominant faith, it has been intolerant of rivals, especially Christianity, the faith of the Crusaders.

By no means are all or most Muslims fanatics of the Osama bin Laden variety, but many are uncompromising in their belief that, once their faith becomes the majority faith in a community or society, Muslims should write the rules and Muslims should make the laws.

And if Americans believe that Islam is consistent with pluralism, ecumenism and a belief in the equality of all religions and all lifestyles, we are headed for what the Chinese call “interesting times.”