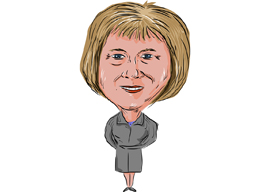 “The lady’s not for turning,” famously declared Margaret Thatcher, and to her credit the Old Girl rarely did. Not so the second woman to become prime minister of the still (just) United Kingdom. Theresa May, who poses as a principled politician”vicar’s daughter and all that”turns about like a whirling dervish. A year ago she was campaigning, if not very loudly, for Britain to remain a member of the European Union. Came the referendum result and the chance to become prime minister and she did an abrupt about-turn smart enough to please her sergeant-major grandfather. This enabled her to outsmart and see off her Tory rivals, who had actually campaigned for a Leave vote. So she became prime minister by acclamation without even a Tory Party leadership election. Neat work.

She at once declared that there would be no early election and that this Parliament would continue till 2020. She has repeated this several times since. She has a majority in the House of Commons, though a slim one, and in the debates before she activated Article 50, giving formal notice of the United Kingdom’s intention to leave the E.U., she has obtained the consent of Parliament. With only a couple of exceptions, the Remainers among Tory MPs have fallen obediently into line, even if a few have done so reluctantly. The Labour opposition has been so feeble that Mrs. May has been able to disregard them, and she has a united Cabinet. Nevertheless she has done another about-turn, and we will have a general election on June 9. Her decision to go to the country is opportunistic and unprincipled.

“May’s decision to go to the country is opportunistic and unprincipled. “

Of course, one can see the reason. The Tories are at 44 percent in the polls, Labour in the middle 20s. Mrs. May can look forward to a landslide win with a bigger Parliament majority than Margaret Thatcher ever had, bigger even than Tony Blair’s in 1997. Labour under the dismal leadership of Jeremy Corbyn is in a state of near collapse. UKIP, since the E.U. referendum, has become irrelevant. The Liberal Democrats, as the only remaining pro-E.U. party in England, may win a few seats in constituencies where there was a sizable Remain majority, but they were so hammered in 2016 and start from such a low base that they are still going to be numerically weak in the next Parliament.

Moreover, Mrs. May must have sensed that her government is as popular now as it is ever likely to be. The Brexit negotiations haven”t begun; they may, probably will, turn sticky. Domestically the government faces a series of funding crises”in the NHS, local government, and education”that will be very hard to resolve, perhaps impossible to resolve satisfactorily. So it’s easy to understand why she has gone back on her word.

Still, there are dangers. There always are when you play for immediate short-term advantage. Mrs. May has proclaimed herself a Unionist, committed to the continued integrity of the United Kingdom. People believed her. They may not continue to do so now that she has shown herself to be a politician who says one thing one day and the opposite the next. She is no Iron Lady like Margaret Thatcher, but one who bends to the prevailing wind.

She is going to find it harder than it was yesterday to hold the U.K. together. Till now it could be argued”if not very convincingly”that the Scottish National Party has no clear mandate for a second Scottish independence referendum. But there will be such a commitment in the SNP’s election manifesto, a commitment indeed to an early referendum. The SNP currently holds 56 of the 59 Scottish seats in the House of Commons. Tactical voting by Unionists may cost it a few, but it is still as sure as anything can be, in these troubled times, that the SNP will again get something like 50 percent of the vote in Scotland. Mrs. May has said that “now is not the time” for a second independence referendum. But if the SNP gets a higher percentage of the Scottish vote than the Tories do of the overall U.K. vote, it will be hard for our slippery prime minister to hold her line.