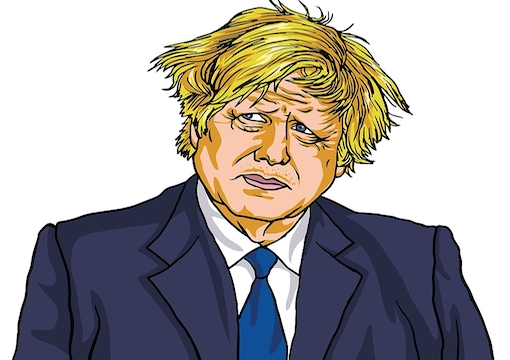 Like Macbeth in Dunsinane, British prime minister Boris Johnson is creating his enemies by ending their careers. Actually, the two share much in common, both having changed their names to gain popular acceptance. Mac Bethad mac Findláich went for the snappier Macbeth, while Alexander Boris de Pfeffel Johnson opted for the chummier Boris. Oh, and there is another trait they share. They both have female partners whom I believe Americans would describe as batshit crazy.

Macbeth, of course, actually took his gal down the aisle, ’til death they did part, and loved, honored, and obeyed. Remember, gentlemen (or indeed ladies): However much your wife gives you a hard time, she is unlikely to demand you commit regicide, so you have that going for you.

Johnson, on the other hand, is a serial philanderer. No media outlet will confirm the number of his children, with seven (by different mothers) being the upper estimate. His second marriage, to Marina Wheeler, produced four children, and here we must pause like the weary traveler to inspect their names, not one of which I have invented as I lack the satirical skills to do so.

“Of the two blondes currently residing at 10 Downing Street, one is going to have to go.”

Now, Johnson is highly educated, studying at Eton before reading classics at Oxford, and can famously quote at length from the Iliad in ancient Greek. But, just as chicks caused a lot of grief in Greece, now goofy-haired Alex has hooked up with a crackpot who makes Lady Macbeth look like Lucille Ball.

Toothy blonde Carrie Symonds was born into the political, legal, and media class (indistinguishable in Britain) on St. Patrick’s Day in 1988. Her father cofounded British newspaper The Independent—think The Guardian lite—and her mother was a lawyer working for, um, The Independent.

She is the first partner at 10 Downing Street not married to the incumbent prime minister—England swings these days—and describes herself as a “conservationist.” Perhaps she gets that muddled up with “conservative,” a word Johnson apparently does not understand either. Symonds is also, it is whispered, the power behind the throne. Imagine Lady Macbeth plus an iPhone with the Green Party on speed dial.

Johnson has an eighty-seat majority in the British parliament, the equivalent of which no American president could even dream. However, although he heads the Conservative Party, the name is somewhat misleading. British Conservatives are mostly the same as American RINOs, and there is little substantial difference between their policies and those of the Labour Party.

This should be the time for political accountability, but there is currently no effective opposition in British politics. The Labour Party dismissed then leader Jeremy Corbyn after their last spectacular defeat, he being a sort of cross between a pub Marxist and a Morris dancer, and replaced him with Sir Keir Starmer, who was a year below me at Reigate Grammar School in London’s leafy suburbs. Starmer is exactly the type of identikit politician we see across the West, those who ask a focus group or special adviser before deciding which breakfast cereal they like.

“Boris” Johnson’s current preoccupation, however, is not COVID, uncontrolled immigration, a burgeoning police state, or steering a tattered, post-Brexit economy through shark-infested waters, but his ex–media Svengali, Dominic Cummings. This Little League Bond villain fits perfectly Kirk Douglas’ description of Stanley Kubrick after the pair worked on Paths of Glory. Cummings is a talented shit. He is the latest generation of governmental information engineer (also known as “spin doctors” in the U.K.), a role malevolently perfected by Labour’s erstwhile media thug Alastair Campbell and the effete Peter Mandelson (now inexplicably advising Labour again) under Tony Blair. On the subject of names, incidentally, Anthony Charles Lynton Blair decided that the matey “Tony” would play better with voters.

Now that Cummings has been effectively fired by Johnson, allegedly partly as a result of Lady MacSymonds’ faction taking against him, he is back, quite literally, with a vengeance. Banquo may not have had compromising audiotapes of Macbeth being politically indiscreet—certainly Shakespeare makes no mention of it—as Cummings claims he has of Johnson, but the ghostly, gory Scot’s place at the table has been taken.

Cummings’ allegations are not on the level of the Scottish play, of course. Johnson did not creep into Buckingham Palace and plant a Celtic dagger into the late Duke of Edinburgh to gain the throne. Rather, scandal revolves around a stray, alleged comment to the effect that Johnson would “rather let the bodies pile thousands high than have a third [COVID] lockdown,” and some squabble about who paid for wallpaper in Downing Street, a spat about as common in the British parliament as a lapel poppy in November. But the boat is rocking.

Despite Britain’s current need for strong leadership, government is still being carried out in much the same way it was in the Roman Empire or Renaissance Florence, by manipulation of the truth, financial influence, intrigue, deception, backstabbing, and that revision of the opening to the Hippocratic oath sacred to politicians: First do no harm. To myself. But whereas Jill Biden’s influence on the American presidency is probably confined to keeping the sock drawer in order and getting the temperature of Joe’s broth right, Johnson’s moll has a worrying amount of influence in Britain, seemingly dictating Johnson’s ridiculous Green policies.

Of the two blondes currently residing at 10 Downing Street, one is going to have to go. So, memo to Boris: Ditch the witch. And, as Lady Macbeth advised her man, if it were done when ’tis done, then ’twere well it were done quickly.