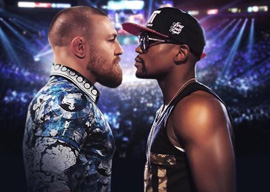 The young man at the supermarket checkout asked me if I would be watching the fight. “No,” I said, “more a media event than sport.” He wasn’t convinced. He would be paying to watch it, and he was backing Conor McGregor to win. I didn’t say he hadn’t a chance. Strange things can happen in the boxing ring. How many thought Buster Douglas would beat Mike Tyson? Precious few, maybe not even Buster himself. Then again, McGregor might get lucky, catching Mayweather early with a big punch. Or there might be a fix—to promote an even more lucrative return.

Then again, Mayweather, though hailed as the outstanding champion of the present day, is now 40. The years might be catching up with him, as they have caught up with even the greatest champions in the past—Joe Louis and Sugar Ray Robinson, even. Still, there are cases of boxers older than Mayweather flourishing. George Foreman was in his middle 40s when he won a version of the world heavyweight title, and “ageless” Archie Moore may well have been pushing 50 when he gave Rocky Marciano one of the hardest fights of his career.

“The fact is that even when there are superficial resemblances between sports, switching successfully from one to the other is very difficult. ”

More to the point, Mayweather hadn’t fought for almost two years. He might be rusty. His reflexes, which have made him such a great defensive boxer, might have slowed. He almost certainly wasn’t quite the man he was five or six years ago. So, yes, defeat was just conceivable.

Just conceivable, but of course it didn’t happen. He won comfortably, as he was all but sure to do. McGregor isn’t a boxer—though, if he chooses, he may become one. He’s a UFC champion, and the no-holds-barred fight game is utterly different from boxing. I might have enlarged on this to my young friend at the checkout counter, but there were already people queuing behind me, doubtless impatiently. So I didn’t.

The fact is that even when there are superficial resemblances between sports, switching successfully from one to the other is very difficult. Take, for example, rugby union and rugby league. They stem from the same root and have much the same scoring system. In both games tries are scored by touching the ball down behind the opposition’s goal line. There are many examples of players who have been successful in both codes; the New Zealander Sonny Bill Williams is one such today. Union and league are certainly closer to each other than boxing and UFC.

Nevertheless, more than twenty years ago, shortly before rugby union went professional, there was considerable interest when it was announced that the two factions would play each other. At that time Bath were the outstanding union club in England, Wigan the outstanding league one. There would be two matches, one under league rules, the other under union ones. In the first, Wigan won very easily, by more than fifty points, as I recall. In the second, Bath won, though not by so wide a margin. The discrepancy may have been partly because the professional league players were then fitter than the amateur union ones, and partly because league defenses were then better organized than union ones. Yet the lesson was clear: It’s very hard to transfer your talents to a different sport, even when the two sports have much in common or are even superficially much the same.