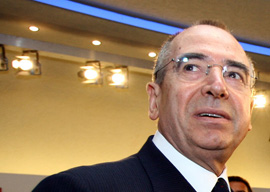 Last week, Italy became the first nation to condemn and sentence to prison two of its own secret service chiefs for assisting the CIA in February 2003 in kidnapping suspected Islamic terrorists on Italian soil and deporting them supposedly in accordance with America’s post-9/11 secret “extraordinary rendition“ program.

On February 12 a Milan court condemned General NicolÃ² Pollari, the former head of the Italian military secret service, to 10 years in jail, his right-hand man Marco Mancini to nine years, and three of their colleagues to six years each. Two other colleagues had earlier been given jail sentences of two years and eight months.

It was the culmination of proceedings that have dragged on through Italy’s labyrinthine court system for nearly 10 years.

The proceedings began soon after the sequestration on a Milan street in broad daylight by CIA agents on February 17th, 2003 of an Egyptian cleric, Hassan Mustafa Osama Nasr, or “Abu Omar” for short, as he was walking to the mosque where it was his habit to fulminate against the West.

“Just as Obama doesn”t mind killing people from the air with drones, he doesn”t seem to mind outsourcing their torture to countries that do not see torture as an issue.”

At the time of his kidnapping, Abu Omar was under investigation and on the verge of arrest by another set of Italian judges in connection with planned terrorist attacks in Italy and past terrorist crimes related to his links with al-Gama’a al-Islamiyya, the Islamist group that some think were responsible for the 1981 assassination of Egyptian President Anwar Sadat and the 1997 massacre of 62 people, mostly tourists, at Luxor in Egypt.

But despite this, yet another set of judges had just granted him political asylum in Italy.

According to Abu Omar’s Egyptian lawyer, once rendered to Egypt the Mubarak government imprisoned and tortured him until February 2007, except for a brief period when he was under house arrest. Nowadays, with Mubarak gone and Morsi in charge, things are looking a lot brighter for him. In February 2009, he wrote to President Obama to say how impressed he was by the new president’s approach to Islam, requesting cash compensation for what George W. Bush had done to him. In August of that year, he filed a suit against the Italian government at the European Court of Human Rights which will enable him to claim massive damages if he wins.

Italy already had the honor of becoming the first nation to condemn, albeit in absentia, 23 Americans involved in “extraordinary rendition,” namely the same 2003 kidnapping episode. Last September, Italy’s Supreme Court confirmed the convictions by the same Milan court in 2009, and again in 2010, of 21 CIA agents, plus a US Air Force Lieutenant Colonel, Joseph L. Romano, who were all stationed in Italy at the time of the kidnapping. They got seven years in jail each. In addition, the Supreme Court confirmed the conviction of the CIA’s Milan station chief at the time, Robert Seldon Lady, who got nine years.

Two weeks ago, the Milan court convicted in absentia three more CIA agents involved in the kidnapping who had claimed diplomatic immunity and so been acquitted in 2009. These three include the CIA’s then Rome station chief Jeffrey Castelli. (In Italy, the prosecution, not just the defense, can appeal.) That’s a grand total of 33 Italian and American secret agents sentenced to jail as a result of a single 2003 kidnapping and rendition of a suspected Muslim terrorist.