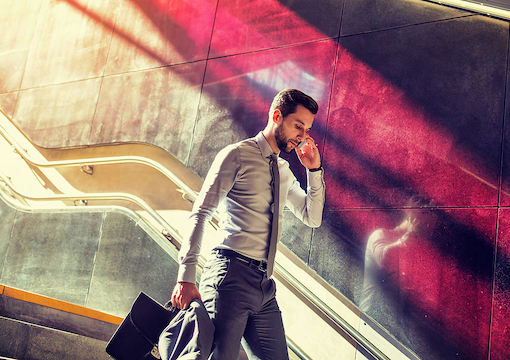 During the Second World War, there was a poster in British stations that asked passengers whether their journey was really necessary, with the implication that it would be beneficial for the war effort if they stayed at home.

I confess that I never really understood the logic of this: After all, if a train was going to run anyway, what difference would one passenger more or less make to its fuel consumption and to the war effort?

“It is time people kept most of their thoughts, and especially their emotions, to themselves.”

The other day, though, on a train journey in England of about 150 miles, the question rose to my mind about several of the people around me. At the very least, I wondered why they had had to take the same train as I. Could they not have taken another? In asking myself this, I was rather like those people on the London underground who, when someone throws himself onto the line, thus causing a severe delay, grumble and ask why he couldn’t have chosen another train to throw himself under.

Two seats from me was a man, about 40 and somewhat overweight but not grossly so, who spoke on and off into his phone for half an hour. It was a business call, about some contract or other. “It’s f—ing insane!” he said, halfway through. “It’s cost us an extra 500 f—ing quid [pounds]!”

At this point, I wanted to approach him and say, “Excuse me, could you explain to me the difference between 500 quid and 500 f—ing quid?”

He could hardly have complained that I was intruding on a private conversation, given that the whole carriage could hear every word he uttered. I wanted to tell him that the word “f—ing” used as an intensifier loses its function when used promiscuously and should be preserved for emergencies. But of course I didn’t say anything.

Nothing that he said was of such moment that it could not have waited arrival at our destination. After half an hour even he had no drivel left in him, and he rang off. It was then that the phone of the woman sitting opposite him, whom I do not libel if I call butch, went off. She, it seemed, was buying a house, and there was a problem with the deeds and a right of way. Could this also not have waited? I appreciate that buying a house is an important event in a person’s life, but my experience of buying houses leads me to think that an hour’s delay makes very little difference in the process.

The difficulty with the purchase was not resolved in the quarter of an hour in which it was discussed. Then for a moment there was silence and I could return to my book, which I have for review, namely The Real Anthony Fauci: Bill Gates, Big Pharma, and the Global War on Democracy and Public Health by Robert F. Kennedy. Vilely produced, on bad-quality paper, closely printed and with minuscule margins, this book required close reading and much concentration, and it is my habit, by no means universal among book reviewers, to read every page of a book before writing about it. But no sooner had I started to read than the young man in the seat behind mine began to talk to the young men behind him.

He had been searching the internet for cheap flights to Lisbon, Venice, or Rome and could not resist communicating, quite loudly, what he had found. Surely, here also was information that did not require immediate communication to others, all the more so as it was clear that the young man had not decided where or when he wanted to go.

From the sound of the young man’s voice, from his intonation, pronunciation, and vocabulary, I assumed that he was of Jamaican descent. He spoke the semi-patois of that social group, and indeed his interlocutors were black. I was surprised, however, to discover that, on the contrary, he was white. One swallow doesn’t make a summer, of course, but this seemed to be a case of reverse assimilation, in which a native, so to speak, assimilated to immigrants, or to the descendants of immigrants. Whether there are many such cases, whether what I witnessed was an isolated case or whether it was indicative of a social trend, I do not know, but I rather suspect the latter. It would be rather surprising, after all, if the constant self-denigration of Western culture that has lasted now at least three decades did not have this effect upon the weak-minded and the impressionable young (though the young man struck me nevertheless as intelligent), who would therefore seek prestige by abjuring it in favor of something else.

During the whole journey, there was not more than five minutes of silence. It was as if the passengers I have described were members of a relay team, who had to take up a baton passed on to them by the others. Above all, no silence, which has the distressing effect of forcing people to attend to their own thoughts! They might even have supposed, these passengers, that they were performing a public service by rendering concentration impossible; for if concentration comes, can distress be far behind?

Very near the station at our destination was a world-famous institute that hosts exhibitions. It had large posters in its windows, with the words “Express yourself!” I wanted to scream, to throw bricks through those windows. “Don’t express yourself!” I wanted to shout. “Keep quiet! Shut up! Keep your thoughts to yourself! Remember, silence is golden! You probably have nothing to say!”

Self-expression is not a good in itself. I have known people who excused their drunken vomiting in the street by claiming that it was a form of self-expression. It did not occur to them that if it were, their self was not worth expressing. Incontinent self-expression is one bane of our time. It is time people kept most of their thoughts, and especially their emotions, to themselves.

Is your conversation really necessary?