Over Two Centuries Ago… 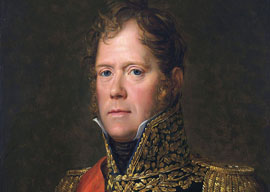 On November 17, 1813, the bravest of the brave, Marshal Ney, had been the last to march out of Smolensk amid harrowing scenes. The hospital wards, the corridors, and the stairs were full of the dead and dying. Napoleon had gone into Russia the year before with 500,000 men and was now leaving with less than 40,000. Ney had only 6,000 under his command but was determined not to fall into Russian hands. The Russian commander Miloradovich had already failed to capture Prince Eugene, Napo’s son-in-law, and the great Davout, so he set his heart on capturing the 43-year-old son of a barrel maker from Lorraine.

Ney did what he knew best. He charged. The first frontal attack failed at the last moment as the French ranks were raked with canister shot. Ney, leading the group, reassembled and charged again. “Whole ranks fell, only to be replaced by the next ones coming up to die in the same place,” wrote a Russian officer. When General Miloradovich saw how the French were charging, he exclaimed, “Bravo, bravo, Monsieurs les Français, you have attacked with astonishing vigour, an entire corps with a handful of men. It is impossible to be braver!” He then ordered his gunners to cut them down, which they did.

As at Waterloo two years later, where Ney had four horses shot down from under him, the Marshal survived the Smolensk battle and the ensuing trap to capture him by swimming for it. The Russians were, how should I put it, magnificent in their cruelty in slowly strangling Napoleon’s men, watching them freeze to death, relieving them of their furs and booty, with the fat, lazy Kutuzov letting Mother Nature take care of the invaders. The latter had been at first surprised at the stubbornness of the Russian defenders, as well as by the almost spiritual manner in which the soldiers readied themselves for battle. (The French were rallied by a picture of the King of Rome, the Russkies by the miraculous icon of the Virgin of Smolensk.) The Cossacks, whose cruelty had even the bravest of their adversaries trembling in case they were captured alive, harried the retreating French, never engaging, just inflicting pin pricks, a sort of slow torture never experienced before or since. Kutusov’s tactics of never engaging Napoleon drove Tsar Alexander nuts, but the old boy knew what he was doing. He feared a cornered Napoleon because he knew the Corsican was a better general than him, and once desperate, anything could happen.

“When was the last time a world leader did something really bold?”

I’ve just reread Adam Zamoyski’s magnificent Moscow 1812, which I read when it first appeared ten years ago. I can never get enough of it. The courage, the glory, the suffering, it’s all too much. Germans and Poles, Frenchmen and Russians, Italians, all covered themselves with glory. The only disgrace, as far as I’m concerned, took place one year later at the Congress of Vienna, where Princess Katya Bagration, widow of the hero of Borodino, fell into bed with Metternich. Bagration bled to death at Borodino because he refused to get off his mount in full view of his men. His widow should have honored him and refused the handsome Austrian. But such are the follies of beautiful women.

Mind you, Napo never won anything important again. Mother Russia had defeated him as it defeated Hitler 130 years later. Which brings me to the present. Unlike the clowns of the EU and the bungling Americans, Uncle Vlad did a Kutusov, went into Syria, avoided the risks of getting bogged down, and, having lost only one aircraft that was shot down by a NATO power supposedly on his side, departed the quagmire with maximum results.

Yet that fool of a foreign secretary, Hammond—never have I seen a man who looks more like a boring accountant—warns us not to cheer because it would be like praising a man who stopped beating his wife. Well, I don’t beat women in general or my wife in particular, so I wouldn’t know. What I do know is that Putin is authentic and authoritarian, the type who wins wars, a spontaneous and courageous leader who has shown up the West as a paper tiger. Let’s face it. When was the last time a world leader did something really bold? And he didn’t declare mission accomplished, either, a declaration that has proved fatal in the case of Iraq and Libya. This is the man the clowns in Brussels tried to bluff with Circe-like songs to Ukraine, so he took back Crimea as a bonus. His standing by Assad has shown up Uncle Sam yet again as an unreliable ally when the going gets tough.

No matter how hard the Americans and Europeans have tried to show Russia as a busted flush, the joke’s on them. And by leaving the playing field, Vlad has shot across the Assad bow, warning him to negotiate or else. Just compare Putin’s stance in Syria with that of Uncle Sam in Yemen. The latter is a humanitarian disaster that rivals that of Syria. The Saudi, Qatari, and UAR air forces have bombarded unarmed people and blown up hospitals in a futile effort to beat back the Houthis, Shiite-backed rebels who have run rings around them. Saudi pilots under American radar guidance are so scared of antiaircraft fire that they fly much too high and are unable to hit legitimate targets. Saudi keeps buying expensive weapons but cannot produce men like those who fought back in 1812. Perhaps they should read Zamoyski and forget high tech.