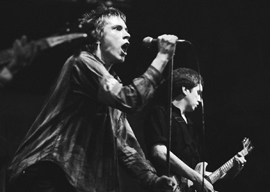 That observation about Donald Trump’s speechifying is so pedestrian it qualifies for its own crosswalk sign. Then again, when one of rock’s most electrifying (and cantankerous) frontmen rates your stage presence, that’s not nothing.

Looks like John Lydon (better known to know-nothings by his Sex Pistols stage name, “Johnny Rotten”) has softened his stance on the new president. Preelection”the first Lydon could vote in since decamping to California from England decades ago”he”d been more hostile toward Trump, while nevertheless calling his preferred candidate, Hillary Clinton, “that lying old hag.”

“I”m up for anyone shaking up the jaded world of politicians,” continued Lydon last week:

It’s all about people combining in one glorious fact: We don”t trust politicians. Anything to rattle that lot is for the benefit of mankind. We”ve been dosed and cosseted by loud and mediocre politicians for far too long and now the wake-up call has come and it’s self-determination time.

Sounds about right, coming from the ripened iteration of the teenager who wrote and performed “Anarchy in the U.K.” But whether he’s being reflexively contrarian or simply candid, Lydon’s political comments occasionally break his fans” hearts; this Guardian writer said he felt like the Pistols singer had “cheated on” him when Lydon, asked to justify a concert in”gasp!”Tel Aviv, replied:

Until I see an Arab country, a Muslim country, with a democracy, I won”t understand how anyone can have a problem with how [the Palestinians are] treated.

Lydon was, of course, mobbed for comment after Margaret Thatcher’s death, and didn”t disappoint”although not in the way so many had apparently been counting on for their entire adult lives:

“Jones mostly tells on himself. It’s unflattering as hell, yet that very frankness earns him back any respect he might lose in the telling.”

So whenever I see John Lydon’s name in a headline, I compulsively click, as I”ve been doing before “clicking” was a thing: His face and snarkiest quotes”snipped from Creem and NME“papered my high school locker. As I said a while back, the Sex Pistols were “my first musical love.”

Yet, weirdly, I haven”t read either of Lydon’s memoirs and have no plans to. “Rotten” is a charismatic genius, but such a prickly, mercurial one that I can only digest him by the spoonful. Besides, I can already hear UKIP called “a black hole for the ignorant to fall into“ pretty much anywhere else.

That’s why, 40 years after their only album dropped, the only Pistols memoir I”ve read is this year’s decidedly apolitical Lonely Boy, by guitarist Steve Jones. I doubt Jones timed the release to coincide with his old group’s ruby anniversary; that would suggest an organizational talent that Jones would probably admit doesn”t rise to the level of his guitar-playing. (He snagged a bottomly spot on Rolling Stone‘s “100 Best” list, a whimsical distinction Jones notes with the weary self-deprecation that pervades his book.)

The khazi [toilet] was outside, and when the tin bath came out in the front room, I”d be the last one into the dirty water after he”d gone first and then my mum had followed.

I don”t remember having a fridge or a TV, no one ever had showers, and for hot water there was a sink with the Ascot heater above it…. I remember when I first went to America in the late Seventies, even poor people who were near the bottom of the ladder seemed to take things for granted that I”d always seen as luxuries.

Like fictional axman Johnny B. Goode, Jones “never ever learned to read or write so well,” and Lonely Boy fairly screams “as told to,” but that contributes to the book’s considerable charm. The occasional “I forgot to tell you about” has been, thankfully, left in, along with other conversational gems like:

One day I got a phone call from Bob Dylan. “Hey, Steve,” he said, however he talks.

And yes, names are dropped: David Bowie (Steve, a compulsive thief since childhood, famously nicked Bowie’s equipment between the penultimate Ziggy Stardust concert at the Hammersmith Odeon and the farewell show), Iggy Pop, Mickey Rourke, Ray Winstone, Chrissie Hynde (had sex with her a lot), Siouxsie Sioux (never did and regrets it still).

Now, I have all the time in the world for Gene Simmons of KISS, but when he boasts of having screwed thousands of women, I get skeeved. Steve Jones” sex drive sounds like it rivals if not surpasses the Demon’s, yet I (mostly) made it through Lonely Boy without getting nauseated or judgmental.

Along with booze, drugs, and thievery””This is the good stuff you just don”t get from the guy from Nickelback…””sex is a propulsive through-line of the book, but there’s no braggadocio or phony “But I”m a sensitive feminist guy now” regret. These bawdy adventures”one is reminded of another famous (albeit fictional) Jones, name of Tom”simply were.

But why? Jones places some blame on another sordid feature of his surroundings: the “local nonce,” or pedophile. “Every area has one,” he says matter-of-factly, and the more you hear about England, the more plausible that seems.

Jones was also “fiddled with,” once, by his stepfather, and struggles throughout the book”without a cc of self-pity”to bring a couple of similar childhood incidents into sharper focus. What’s clear to Jones now”after 25 years of sobriety (which actually intensified his libido), hours of therapy and TM, and simply the passage of time”is that “the consequences of what happened are still with me half a fucking century later.”

I understand completely, but although This Sort of Thing goes on the world over, what seems uniquely English is the level of systemic perversion. While the McMartin preschool case made me forever suspicious about “Pizzagate“-style moral panics, there was something to Operation Yewtree.

Hilariously, they”re practically neighbors now”Jones also fled London for L.A.”but he and Lydon never got along. However, he gives his former frontman tremendous credit for trying to “tell the truth” about Yewtree’s “star,” Jimmy Savile, in a (hastily shelved) BBC Radio 1 interview back in 1978.

“Imagine how many kids” lives wouldn”t have got ruined,” Jones muses now, if that segment had, miraculously, made it onto the air”or someone in the control booth had had his conscience pricked.