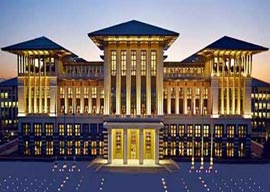 No one can build a decent palace anymore. I agree that this is not one of the greatest social problems of our time, but it must nevertheless be revelatory of something economic or cultural.

My first reaction when seeing President Erdogan standing at the foot of the stairs of his palace in Ankara, said to be several times larger than Versailles, was to laugh (I am not a Turkish taxpayer). Surely it was some kind of film set, to be dismantled when the film has been completed. They would do better in Hollywood, or even in Las Vegas. At least there it would be fun. As for the janissaries that Mr. Erdogan now uses for ceremonial purposes, any provincial theatrical costumier would be ashamed of their tawdry inauthenticity.

Why can”t we build a decent palace anymore? I used to think it was, at least in part, a question of the price of labor. Even in the worst despotisms (and Mr. Erdogan’s is only incipient) they have to pay workers more than the amount that will just keep them alive, if that; their wages must cover their mobile phones, for example. This means that ornamentation must be industrialized, and industrialized ornamentation bears the same relationship to the handmade variety as processed cheese does to real, or out-of-season greenhouse strawberries to wild. No one these days can labor lovingly, or at least fearfully, for weeks to produce the merest trifle or detail. We measure output by quantity, not quality.

“Perhaps we should just accept that ours is not the age of the palace and agree never to build one again anywhere.”

But I do not think this quite goes to the heart of the matter. Even in those places where money is no object and there is access to a nearly inexhaustible fund of cheap labor, what we get is kitsch. It is true that kitsch on the modern Arabian scale almost transcends itself. The Arabs of the Gulf at least have the courage of their bad taste, and kitsch on the scale on which they patronize it becomes awe-inspiring. I even admit to a certain fondness for it. Though I would not want to live among it, the memory of it enriches my stock of mental images, and I smile whenever I recall it. Moreover, bad taste performs a vital function: It helps us to delimit, if not to define, good taste.

It is not only poor old Mr. Erdogan who is no good at palaces; I can”t think of anybody who is. Perhaps we should just accept that ours is not the age of the palace”equality is an ideal that is so universal nowadays that the very idea of a palace is anathema”and agree never to build one again anywhere. There could be international agreement on this, something akin to the treaty limiting the spread of nuclear weapons: the Non-Proliferation of Palaces Treaty.

Of course, some countries, usually ruled by strongmen with faces like tombstones, might demur. Why should Europe and a few countries in Asia be allowed to keep their monopoly of palaces? It is a bit like treaties trying to limit pollution. The Western countries thought of them only when they started to face competition from the rest of the world. Until then they didn”t give a hoot for pollution.

Unfortunately, contemporary tombstone-faced strongmen prefer a hybrid type of architecture, inspired half by Busby Berkeley and half by the mausoleums of communist potentates. The Marquis de Custine was appalled in Saint Petersburg to see what he called the trifles called forth by tyranny, but it must be admitted that the tsars were to modern tyrants, in the matter of taste, what Brillat-Savarin was to Warren Buffett in the matter of diet. Generally (though not in every case) they were less ruthless, too.