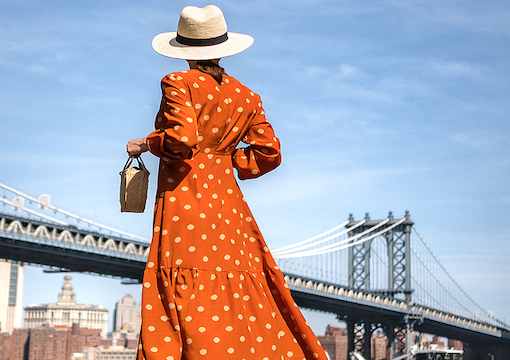 NEW YORK—It’s party time in the Bagel, at least private party time, yours truly being an extra man nowadays as my wife and I have been separated by pandemic restrictions for six months. Alexandra is in London, quarantined after visiting two little blond things in Austria for my fourth grandchild Theodora’s first birthday. I am doing dinner parties nonstop in the Bagel as if I were a gay walker back in the ’70s.

Actually I’ve been seeing a lot of old friends who threw dinners for Lita and George Livanos. We were mostly the same crowd, as New York society types have gone the way of wooden sailing boats and tennis players wearing all white. And speaking of tennis, Naomi Osaka’s depression has everyone butting in about how tough it is to make 55 million big ones last year and have to face the press after a tennis match. It’s simply nerves, dear, and all athletes suffer from them, but not all make 55 million and become poster girls against racism. Just because clay is not a surface you can win on, should not bring on depression and surrender. But your handlers are right. You’re a bigger star now than before; a depressed anti-racist is as rare as a hooker in Dubai.

“I met her through my closest friend in the Bagel, Michael Mailer, who is now known as Ben, short for Benedict Arnold.”

But I got sidetracked. What I miss most here in the Bagel are feminine women—then I met one whose name is Peggy. Peggy is very attractive and a poet, well-bred but not inbred, also married, something that raised my hopes when I was first introduced to her. Panting for Peggy, I told her, is the title of my next best-seller, but it went over like an anti-BLM peroration in Portland, Oregon. I met her through my closest friend in the Bagel, Michael Mailer, who is now known as Ben, short for Benedict Arnold. Unlike those cheapskate legislators in Philadelphia who wouldn’t pay the bravest and most aggressive American general fighting the Brits, I had Michael and Peggy to a lavish dinner and got zilch for my trouble. Worse, he told her I was happily married for 49 years to someone very attractive, and that I was an old man. I now feel like Gentleman Johnny Burgoyne, who surrendered to Horatio Gates in Saratoga, where Benedict Arnold had excelled and been wounded. Burgoyne had arrived ready to give battle with wife and mistress in tow, plus forty trunks. Poor Taki arrived at his own dinner with nothing but hope and was cheated of victory by the banality of Ben’s betrayal.

Never mind. Nothing pleases me more than female beauty, in which charm and femininity are all-important. Today’s so-called stars have a sterile side to their physical beauty, and some are downright ugly. The only three female actresses I die for nowadays are Dakota Johnson, Lily James, and Emma Stone. All three have imperfections—Dakota’s slightly crooked teeth, Emma’s indiscernible pop-eyes, Lily’s lower jawline—but it’s the imperfections that make a woman truly beautiful and different. We’ve come a long way from Pandora and Eve, who were the first to bring on devastation and immense evil to mankind. The third one is called #MeToo, but she’s too unfair, ugly, and hysterical to include in the discussion about Dakota, Emma, Lily, and Peggy. Some fool wrote that chastity and beauty in women are incompatible; I say it is unfortunate but definitely compatible. Nothing turns a man on more than a chaste woman, and every man who values chastity sees himself as a future exception to the rule. The Greek word “ego” comes to mind. But I want to get back to Peggy.

I don’t know her well at all; she’s either 28 or 31, but looks younger. I don’t think the reason she rejected me is age. Had she been a gold-digger I would have added ten years and told her I was 94. Ruskin proposed to 18-year-old Kathleen Olander when he was 68. She turned him down because he was already very ill. I’m not at all ill, and I didn’t propose marriage, in fact I didn’t propose anything at all. I am aware of the Whisperer, the one that followed Romans around and reminded them not to get too full of themselves, lest they suffer from a case of hubris. Harvey Weinstein, rotting away in a prison and facing 22 years to go, should have listened to the Whisperer. I’ve seen only the pitiful side of Weinstein, the one that begs women to go to bed with him, the one where he promises big roles and tries to be a best friend. I have not seen the gruesome side where he allegedly attacked and raped women. And I have to be careful when mentioning Harvey. He is still wanted in Los Angeles for more alleged rapes, but what I think is that Hollywood’s virtue-signaling hypocrisy should have gotten 23 years, and Harvey only five.

But here we are. Members of the House of Lords are forced to watch a filmed scenario on how to behave with women. Do you believe this crap? What will they require them to do next, learn to pee standing up? They, whoever they are, should be showing films on how to keep a marriage permanent—like Taki’s—and not permit husbands to cast wives aside. My 49-year-old marriage should be the template. After Peggy, however, the wife might never forgive me. But she might forget. Alexandra is 117.