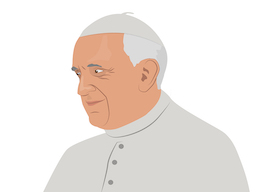 Just as love means never having to say you’re sorry, so being Pope means, I suppose, having to preach to, or perhaps at, the world. And Pope Francis certainly fulfills that part of his function.

He recently turned his attention to the evils of adjectives and adverbs. He said that we have fallen into a culture of them and, like a papal Hemingway, said that we should eschew them in favor of simple nouns.

To an extent, from the stylistic point of view, the Pope is no doubt right. There is too little thought, and there are too many words both spoken and written, in the world. The writer, especially when he is paid piecework, is tempted by wordiness, verbosity, pleonasm, supererogation. Dostoyevsky’s books are so long not because he had so much to say but because he was paid by the page. When I am paid by the word—$1 a word, shall we say by way of illustration, though alas it is usually far less—I always delight to use such locutions as in so far as or in as much as, of course eschewing the perfectly correct insofar as or inasmuch as for obvious reasons: They are worth $2 less to me. Indeed, whenever I have typed in so far as, I pause with delight at having earned $4 in the fraction of a moment that it has taken me to type it. If only I were paid at the hourly rate, I would by now be a very rich man.

But let us turn to the Holy Father—or, perhaps in deference to him, I should call him only the Father. Let us pursue the theological consequences of his suggestion that adjectives be expunged from our speech and writing, for example the effect on the idea of belief. We should not be able, if we were to follow this self-denying ordinance, to qualify the noun belief by the adjective Christian; and since everyone believes in something, from the healing Chakras of the Earth to the American Constitution, it follows that all beliefs must be equal, since none could be qualified by an adjective. We are all believers. This seems a very strange thing for the leader of a religion to believe, if I may put it that way.

When it comes to the attributes of God, it would be difficult, or at least affected and pedantic, to go altogether without adjectives. I know that there are some people who claim that the attributes of God are unknowable (though the word unknowable is also an adjective), but from my limited acquaintance with Christian theology, I suspect that this is not the Christian view. The God of Christianity is a loving God, albeit that the term a loving God could be replaced by a God who loves. Nothing, however, would be gained by such a substitution, except an extra word and a certain verbal infelicity.

Here I offer an interpretation of the Pope’s attack on adjectives and adverbs, though like all such interpretations, it is quite possibly wrong, and I apologize in advance if it is. The Pope must speak; he cannot remain silent. We have already had enough from him about the iniquities of poverty, famine, war, inequality, injustice, and so forth; he was in danger of turning into an ecclesiastical Greta Thunberg. Like a newspaper columnist—here I admit that I might be in danger of being hoist with my own petard—he had to find something new to say to avoid becoming a bore. Moreover, he needed a target that would have no defenders; as far as one knows, there is no fanatical Adjectives’ Defense League waiting to leap to violent attack on those who disrespect adjectives.

The need to say something is often far greater than the need, or the capacity, of the speaker to say something important or worthwhile listening to. Many a person wants to communicate without having anything specific to communicate. Some of my young patients said they wanted to be writers, but when I asked them what they wanted to write about, they had no answer. It was not a question that had occurred to them.

The question of the appropriate use of adjectives and adverbs is one of style, not morality. But the notion of a good style is a slippery and difficult one. No one would deny that Donne’s Devotions Upon Emergent Occasions were written in a beautiful style, but no one would recommend its employment nowadays. George Orwell laid down rules for what he thought was a good prose style, but his last rule was the most important: Disregard any of the rules if it impeded a good style. In the preface to his wonderful anthology of English prose, John Gross—who knew more about English literature than any man I ever met, but who was entirely free of pedantry—said that he included works of an enormous range of styles, all of them good and all of them delighting him. A man who is constricted by a stylebook is a man who suffers from a kind of verbal scleroderma.

I love the story of a famous British writer editor who, on his deathbed, said something like (I quote from memory) “I think I may have used too many commas; but in the matter of semicolons, I have nothing to reproach myself with.” He did not say, nota bene, “with which to reproach myself,” which some pedants, who believe that one should never end a sentence with a preposition, might have preferred or even deemed mandatory. The rhythm of a sentence has its claims, sometimes over the strictest rules of grammar.

On my deathbed, I think I shall probably reproach myself for having used too many commas. Moreover, a journalist colleague once remarked on my fondness for colons. But at least I shall not be able to reproach myself that I have traduced the use of adjectives and adverbs, which are, like the poor, ever with us. I mean the poor as a noun, of course; for the quickest way to eliminate poverty from the world would be to ban the use of the word poor as an adjective.