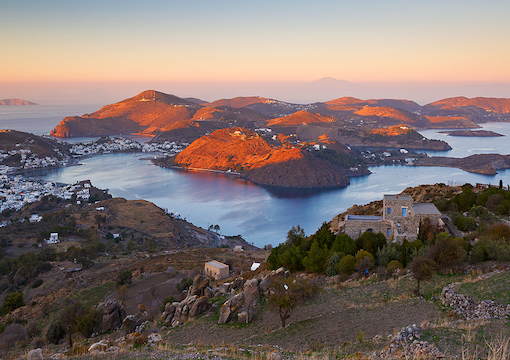 PATMOS—Judging by the news, the world is finally coming apart: Chinese lab escapee Covid is still going strong, the monkeypox plague is targeting gays, record heat waves are crippling Europe and America, mass shootings are becoming a way of life in the U.S., there’s a war of attrition in the Ukraine, Taiwan is being threatened by China, and gloom and doom are everywhere but here in the holy island of Patmos, where Saint John wrote the Apocalypse 2,000 years ago, the backward natives are using pronouns such as “his” and “hers,” and they even recognize women as a biological reality.

And it gets better—worse, actually: The only conflict on this beautiful isle is the one between your intrepid correspondent and a young woman who demanded my table at Vaggelis, in the square where the elite meet to eat. She turned out to be the daughter of Ahmed Chalabi, the man who convinced truthful Tony and genius George that Saddam Hussein was about to nuke us, so we went to war, killed about 200,000 Iraqis, and upset the applecart—and his daughter complains about the rude way I wrote about her father. Daughters should defend their fathers; Svetlana Stalin (Uncle Joe’s little girl) denounced her dad and happiness eluded her. I hold no grudges, but a few Iraqis might.

“Unlike the brothel that Mykonos has become, Patmos is family-oriented, with very polite, friendly locals and civilized tourists.”

Never mind. The crisis-strewn world stops here, way out in the eastern Aegean, with sun-drenched days, cool nights, and much too much wine at dinner. American and Brit trans zealots would find the place blasphemous. Locals are anathema and backward, still using words such as “women,” “breastfeeding,” and “pregnant,” and there are even public conveniences with signs on them depicting the two sexes. Despite such peccadilloes I have yet to meet anyone objectionable on the island. Unlike the brothel that Mykonos has become, Patmos is family-oriented, with very polite, friendly locals and civilized tourists. I’ve rented a late-18th-century house high up in Chora, near the great monastery that overlooks the town and the harbor below. Pirates must have given the place a miss when faced with the sheer heights they needed to scale in order to plunder. What I don’t understand is why Greek island houses are so beautiful, and Greek city dwellings so ugly. My daughter, her husband, and their two very blond children, Antonius, 3, and Theodora, 2, have a house nearby; my son and his daughter have moved in with me and the wife; and I suddenly feel very old when everyone refers to me as papou, “grandfather” in Greek. Even if I looked like Errol Flynn I’d have absolutely no chance to pick up a young woman while brats are screaming, “Papou, papou.” Perhaps on the boat things will improve. She’s arriving next week and I’m going on her and sailing west, if only to escape the cries of the two little blond things determined to point out my age and status to the isle’s female population.

Although I pride myself on being an observer of the wildly fluctuating modern cultural scene, I am also a participant, which is the hard part. Here in Patmos it’s easy to report. It is far harder to mix and write about today’s youth, such as the goings-on in Mykonos, where new money meets even newer money, and the very vulgar rule. What bothers me is that the new don’t care at all about the old virtues of courtesy and politeness, probably the first things the old new were taught. Trendy people nowadays seem to be blinded by avarice and consumerist lust, while forgetting that generosity means giving away what you can’t afford, not offering champagne to a hundred yobs in a strip club.

I know that I have a distinct angle of vision where the rich are concerned, and can trace it back to my youth when the rich I knew were all gentlemen of the old school, and those who were not nevertheless adhered to rules of that school. The irony is that my children, who behave impeccably, think that I’m a bit of a stuffed shirt when I won’t set foot on Mykonos and call people out for going there. Well, perhaps they’re right, but I knew Mykonos when it was a great brothel, whereas now it’s as low a whorehouse as it’s possible to be. And yes, the social permissiveness and total openness toward sexuality have done away with past taboos, but life without certain constraints and moorings leads to decline and destruction. There, the great moralist Taki has spoken.

The irony is that morals and manners have been changing all through my life. Far from an exercise in nostalgia, I now find myself astounded at the bad taste and ignorance of youth, the absence of the genteel romantic idea and conceptions of chivalry and honor. And wherever I look—to the Greek islands, the Swiss mountains, even the Brit and Yankee countryside—urban human filth has infiltrated and has done damage.

I know, I know, I’ve got very little to complain about, but quality of life is all-important, and modern man is to that quality of life what Bomber Command was to Dresden church architecture. Regaining a paradise lost is impossible, and trying to is a fool’s errand. I nevertheless keep trying, next week on one of the most beautiful sailing boats ever, and heading for the most beautiful of private islands.