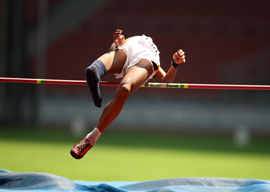 I just flew back from the Paralympics, and boy is my arm tired. No, but seriously folks, Britain appears to be going bloody mad for the fourteenth Summer Paralympic Games, and unlike the congenital diseases that cause many of these disabilities, the excitement’s contagious!

I drove from Glasgow to London last week and everywhere I went, the ubiquitous “MEET THE SUPERHUMANS“ billboard was there. You couldn”t pick up a paper without having a wheelchair rammed down your throat.

The cover of the Daily Mail screamed:

Thought you’d seen the greatest show on Earth? Paralympics explode into life – and they’re every bit as awe-inspiring.

Stephen Hawking kicked things off with a “rousing address.” The news bombarded us with “Paralympic Fever,” and “excitement soared“ as an Asian man with no arms wiggled himself out of the water.

I saw a paper with a Ukrainian swim coach lowering an athlete into the water with the caption, “This photo needs no caption.” (Supposedly we”re expected to make crane puns on our own.)

“It’s good to be kind to those less fortunate than us, but when everyone gets a medal, nobody wins.”

A Daily Telegraph cover I couldn”t avoid in our hotel lobby featured a teenage dwarf from the Midlands who was holding up yet another gold medal for swimming. Prime Minister David Cameron was giddy with excitement as he gave her the medal. Like most politicians, he was booed. Many handicapped people are angry that the Paralympics allowed Atos as a sponsor. The French IT giant is conducting the tests behind Cameron’s fit-to-work test that decides which cripples no longer deserve welfare.

It’s not just the gimps booing. Londoners hated the regular Olympics and the rest of Britain finds the Paralympics mildly interesting at best. I spoke to dozens of people across the country and where the papers show accolades and hyperbole, the pubs had nothing but eye-rolling and honesty. “I think it’s nice that they”re out there and getting together,” a banker told me who had actually attended the Games, “but it’s not like anybody’s going to see a particular event. This isn”t Man United playing Arsenal.”

Many people I spoke to watched the events on TV and said they enjoyed the ones where everyone was on a level playing field as in wheelchair basketball, but the rules for athletics and swimming left them so baffled, the whole thing felt condescending.

You need to take LSD to understand the rules, but the point system has something to do with classifying how crippled you are and then judging your medal based on how much you overcame. Ellie wasn”t competing with other dwarfs; she was competing with a mishmash of “differently abled” competitors. The pool looked more like the Star Wars bar in an aquarium than an Olympic event. Competitive swimming is meant to come down to a fraction of a second. How can you put such a wide variety of swimmers in the same pool and shoot the starting gun with a straight face?

If you”re more capable of doing something than someone else, it’s liable to cost you the gold. Paralympic swimmer and American world champ Mallory Weggerman admitted she had “lost faith“ in the system when it changed her classification on the eve of the event after they downgraded her degree of disability. British long jumper Stef Reid suffered a similar fate and said she was disappointed at this year’s Games when she lost the gold to someone less capable than her even though Reid had jumped the farthest.