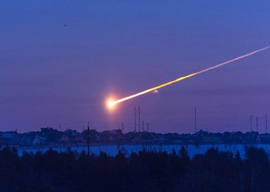 A meteor exploded over the Russian city of Chelyabinsk around 9:20AM local time Friday. First there was a fireball brighter than the sun, followed by a blast wave that blew down doors and smashed windows. More than 1,000 people were injured, mostly from flying glass.

Chelyabinsk is a tough town; it makes Chicago look like Fire Island. In Russia they make Chuck Norris-style jokes about its inhabitants.

The city grew when Uncle Joe relocated heavy industries there back in the Great Patriotic War”people used to call it Tankograd. Later it became a center for nuclear weapons development. In 1957, a chemical explosion in a plutonium plant in nearby Kyshtym released vast amounts of radioactivity that just missed Chelyabinsk. For years there were minimum speed limits on the highways going through the contaminated zone. You had to go faster than that minimum”because the area was so radioactive, you see. I doubt a mere meteorite will leave much of an impression on Chelyabinsk.

“Preparing for a rainy day is terminally uncool. It’s as white-bread as being Swiss or joining the Boy Scouts.”

Friday’s explosion was powerful”perhaps 25 times stronger than the Hiroshima bomb, judging from sonic data. Damage was limited because it occurred at a very high altitude. It appears to be the largest since the Tunguska impact, which exploded over a remote region of Siberia in 1908. That earlier explosion was even more powerful, a thousand times greater than Hiroshima. It leveled about a thousand square miles of forest, but there seem to have been no casualties since the region was uninhabited.

Injuries from such cosmic collisions are extremely rare. A meteorite crashed through the roof of a house in Sylacauga in 1954, bruising Mrs. Elizabeth Hodges. Evidently stars do fall on Alabama. In 1911, one hit and killed an Egyptian farmer’s dog. Worse yet, a meteorite totaled a red Chevy Malibu in Peekskill, NY in 1992. Chelyabinsk’s casualties are unprecedented.

Powerful meteor explosions like the one over Chelyabinsk are not so rare. In recent decades, military satellites have detected many such events. Generally they strike oceans or other uninhabited regions, since cities cover only a tiny fraction of the Earth’s surface.

Should we worry? Yep. If this meteor had exploded at a lower altitude, it would have smashed that city flat and killed hundreds of thousands of people. How likely that was depends on the details”most meteors are not strong enough to hold together during that kind of re-entry, although some nickel-iron meteors may be. The Tunguska explosion would have utterly destroyed any city it hit.

It’s not quite as bad as a nuclear weapon: It would only kill you with fire and blast, rather than fire, blast, and radiation. You’d only die twice”Sean Connery might survive.

However, someone might mistake such a natural explosion for a nuclear strike, and that would be bad. I know that we spend most of our time worrying about terrorists from Trashcanistan wielding box cutters, but the nukes are still around, and they still matter.