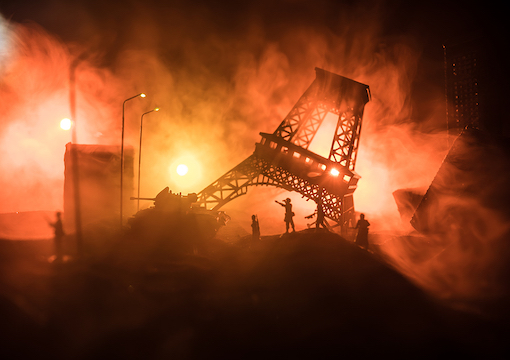 The 1942 movie Casablanca is the cinematic version of Shakespeare’s Hamlet, which a Victorian woman reportedly disliked because she found it “full of clichés.” It ought not to be legal to be unable to recite at least one of Bogart’s lines as suave restaurateur Rick Blaine, and my personal favorite is when the radiant Ilsa Lund, played famously by Ingrid Bergman, reminds Rick of the couple’s dalliance in Paris as the Wehrmacht marched in. He replies:

I remember every detail. The Germans wore gray. You wore blue.

It is not his only comment on the City of Love in the movie, as he adds, “We’ll always have Paris.” Don’t be too sure, Mister Rick.

Paris goes by many names, one being the City of Lights, and if you wanted to see France’s capital all lit up, you should have been there over Christmas. On Dec. 23, a man allegedly 69 years old, white, French, and with a self-confessed dislike for foreigners, walked into a Kurdish cultural center in the heavily immigrant 10th arrondissement and shot three Kurds dead, wounding three others.

Now, Paris is not Chicago, it’s not even Kosovo, and this type of shooting is a rarity. But the response was not the comparatively mawkish displays in the U.K. or USA, whereby candles and teddy bears are placed at the site of the latest tragedy. Instead, Paris’ Kurdish community rioted so hard they made the BLM chaos in 2020 look like a dorm pillow fight.

“Paris’ Kurdish community rioted so hard they made the BLM chaos in 2020 look like a dorm pillow fight.”

By Boxing Day, when the cars were all burned out and the testosterone had worn off, the protests were solemn and processional, accompanied by haunting, threnodic music. (Oh, and of course another staggering tax bill for Parisians to clear the debris.) Framed photographs of the dead were held up at the head of the gloomy marchers. It was strangely moving.

Then the rioting started again, protesters using metal bars to smash the boulevards in order to provide missiles to throw at the police. Torched cars, tear gas, police charges, batons. I wonder if any old soixante-huitards, veterans of the 1968 student riots in Paris (and elsewhere) that almost brought down de Gaulle’s government, looked on at the carnage with misty-eyed nostalgia and thought, “Whatever else these Kurds are good at, their rioting is top-notch.”

The Kurdish people are the largest stateless population in the world, and Kurdistan is a theoretical jigsaw puzzle, some of which has its autonomy recognized, some of which does not. It seems that everyone just forgot, in the general hubbub of the 20th century’s World Wars, to create Kurdistan, which these enforced nomads have been looking for ever since. But they have a formidable and ruthless enemy in Turkey.

The response of the latter to the Parisian rioting was informative, as Ankara summoned the French ambassador, not to ask whether there was anything they could do to help, what with their roguish but lovable neighbors having just burned down the 10th arrondissement, but to express concern at some of the flags flown, and social media comments made about the shooting.

The Turkish deep state—everyone’s got one these days—despises Kurds, and particularly the Kurdistan Workers’ Party (PKK). To be fair, they have a point, PKK flags being bright red and featuring in one corner a rather clever symbol composed of a yellow hammer and sickle, which may be familiar to you. They were conspicuous in Paris. The PKK are also proscribed worldwide as a terrorist organization—a point to which we will return—but at what stage did a Muslim country in the Asiatics get to tell France who can and cannot march in their streets? Around the same time China opened police stations to look for dissidents in the Americas, I guess.

The PKK are not Commie LARPers. They are a proscribed terrorist organization banned across the E.U., the U.S.—ah, forget about it, it’s easier to say where they aren’t banned. North Korea or Cuba would probably buy them a beer, but the latest Global Terrorism Index hardly puts them in the big league. So why the blanket ban? Well, the Index is produced by the Institute of Economics and Peace, which is a branch of the European Union, which is de facto run by Germany, which has always appeased Turkey. So perhaps the Turks forced the ban but kept the PKK out of the papers to avoid giving them publicity. Just a thought.

Also, comments were made in the idiot’s agora of social media implying that Turkey was behind the Parisian shooting. An awful lot of logistics, that, just to whack out three Kurds 1,700 miles away from Istanbul, and the authorities are sticking with the line that the suspect is a crazed Frenchman who had been released from jail after a saber attack on a migrant camp. Reuters attempted to contact the suspect’s lawyers but without success. Now, that is odd. Western governments are so keen for right-wing extremist killers to exist that, when they actually do, their face and history are on the news 24/7. But it’s all gone a bit quiet, and the question remains: Who killed the Kurds?

The Turks get all their news from state-run news provider Anadolu Agency, essentially Pravda with a fez, and their anti-Kurd response is to be expected. But the European media is being coy about this whole affair. They don’t want to annoy anyone, as in anyone. One thing that even the media can’t smokescreen, however, is that Paris is no longer the City of Lights but the City of Riots. And that will hurt more as rioting becomes the new soccer.

Paris famously empties of Parisians in August as they head south to the famous resorts of Nice, Cannes, Juan les Pins. But if riot season now starts at Christmas, by summer some of those escaping gay Paree won’t be coming back. White flight works to the same principle throughout the West. Worse for Paris, much as the media and the tourism lobby will try to minimize footage of daily rioting, tourists foreign or domestic just will not visit a war zone. “Hey, honey, how about Paris in the spring?” “Sure, cheri. You get a Guide Michelin map, I’ll see to the Kevlar body armor.”

Whether the Kurd-killer was a crank or a Turkish emissary, the Kurdish community blamed the French for failing to protect their people. Really? Perhaps sir and his wives would like 24/7 personal security? Leave it once again to the French taxpayer, allez! What becomes clearer with each of these internecine disputes—be the killer a racist nutjob or a Turkish hitman—is that when countries import sectarian religions, they also import either the strife that goes with it or a whole new civil war. Then it’s their problem.

Paris might want to think about lines not from Casablanca but from Dickens’ famous opening to A Tale of Two Cities, set in London and Paris:

One or the other. You can’t have both.