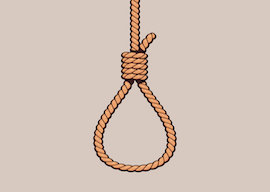 The continued thoughtless use of the word person continues to puzzle me. Who was the Per whose son gave his name to every member of our species on the planet? Per is a well-known first name of Scandinavian men: Is it claimed, therefore, that we are all descended from a Scandinavian man? Is it not common knowledge that our species first emerged in Africa?

And why son of Per? Parthenogenesis, the development of an organism from an ovum without fertilization, is at least a biological possibility, but reproduction from a man’s gamete alone is not.

On two grounds, then, the word person is profoundly sexist, and its use ought not only cease but be strictly prohibited. It should be replaced by something gender-neutral: I would suggest parthen (from the Greek parthenos, virgin) for per and offspring for son, making, when put together, parthenoffspring.

And while we are on the subject, why do we continue to use the sexist word hangman? It is true as a matter of historical fact that, at least since Judith decapitated Holofernes, most executioners have been men, that is to say were assigned male sex and gender at birth, but this is yet another example of sexist ascription of roles in life. According to the stereotypes deeply ingrained in the Western psyche, women knit at the foot of the scaffold while men play the active role upon it.

If ever capital punishment were reintroduced into Britain, therefore, I would expect the now-customary statement by interview committees for public employment that applications for the post of executioner were particularly welcome from women, members of ethnic minorities, and the disabled (because the employers were against discrimination, except in favor of some). In fact, it would be necessary that all executioners for centuries to come were women, to right the immemorial historical injustice of the past centuries, when there were no female hangmen (or hangpersons, that is to say hangparthenoffspring). In the days when murderers in Britain were, or at least could be, hanged by the neck until they were dead, the authorities used to receive five unsolicited applications a week for the position of hangman (which was already adequately filled): all of them from men. Could there be more powerful testimony to the prevalence, persistence, and malignity of gender stereotyping than that?

But natural justice requires that what is sauce for the (gender-assigned at hatching) goose is sauce for the (gender-assigned at hatching) gander: and therefore that all those gender-assigned-at-birth women who demonstrated during and after the confirmation hearings of Judge Kavanaugh, to the effect that the women who accused him of misconduct are to be believed qua women, are in fact guilty of the most flagrant sex stereotyping. They degrade their own sex and render it less than human.

One of the consequences of language in which it is possible to express propositions that are true or false is that it is also possible to be mistaken or to tell lies. Indeed, you might also almost say that the ability to tell lies is one of the characteristics that separate Man from the animals. No one is capable of telling the truth who is not also capable of telling lies.

Note that I am not saying that Dr. Christine Blasey Ford, Kavanaugh’s main accuser, did tell lies, only that to claim that she did not do so because women ex officio do not tell lies is actually to diminish women as human beings. Indeed, there are possibilities in this whole sordid story other than lying on one or the other side. Someone is not telling the truth merely because he or she is not lying; he or she may honestly believe what in fact is not the case. In other words, no one is to be believed ex officio.

At the very least, what Dr. Blasey Ford said was not substantiated, and insofar as there is evidence other than what she said, the evidence is against her. This is not quite the same as saying that her testimony was untrue, however; but as the matter stands at the moment, no criminal prosecution could possibly be brought on the basis of what she said, and even a civil case, decided on the balance of probabilities, would fail.

What we are left with is a mere possibility, and it seems to me unlikely that, in the absence of startling new evidence, it will ever amount to more than that. This being the case, what the demonstrators demonstrated was how little they respected due and established process and how fragile was their belief in the rule of law.

If they believed Kavanaugh should not be confirmed because of the unsubstantiated allegations against him, they presumably think that he is not fit for any other high judicial position, either. After all, it is not as if he was a complete unknown before his nomination. He was an important judge and a teacher at Harvard. If he had not been confirmed as Supreme Court judge, he would have returned to those positions. But you can hardly be morally unfit for a position on the Supreme Court, but morally fit for a judicial position second only to it.

In other words, the demonstrators would let unsubstantiated allegations—provided they were of the right sort—wreck a man’s career and perhaps even deprive him of a living, certainly stain his reputation for the rest of his life if not longer, principally because they didn’t like his views. This is surely the kind of thing one would expect in a totalitarian dictatorship, complete with staged outrage and accusations against which there can be no complete defense. In addition, what Kavanaugh was put through would surely make any person think at least twice before accepting nomination for so high a position. I hasten to add that I thought Kavanaugh’s statement to the committee after Dr. Blasey Ford had given her evidence was a very bad one. As he himself was soon to recognize, he spoke in a way in which he should not have spoken and said things that he should not have said. To me, indeed, he sounded more like a politician than a judge. But that is beside the point.

The most significant effect of the whole sorry episode is the advance of the cause of what can be called Femaoism, an amalgam of feminism and Maoism. For some people, there is a lot of pleasure to be had in hatred, especially when it is made the meaning of life.