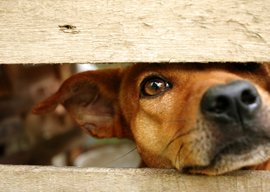 The environmental movement is predominantly liberal, which means its thought process works backward. They start at the end with a wishful thought””Don”t make this animal sad””then promptly moonwalk off a cliff.

In San Francisco right now, PETA is fighting the awkwardly named Wonderful Opportunities for Occupants and Fidos (WOOF). The WOOF program pairs unwanted pets with homeless people in a desperate attempt to cheer up both. PETA, possibly acknowledging that most bums are wasted crazy people who can barely take care of themselves, has offered $10,000 to euthanize the WOOF program. PETA can afford to make such offers because they take in about $35 million a year. They can also afford to kill. PETA euthanizes 96% of the animals they takes in and last year they were reportedly only able to find homes for 24 pets.

Leftists don”t start at the beginning with the hand they”re dealt. They start at the end with a Royal Flush and when it doesn”t work out, they draw “10, Jack, Queen, King, Ace” on their cards with a Sharpie. WOOF may not be ideal but it’s the lesser of two evils. Even if the homeless person ate his new pet, both sides are better off.

“If you really want to save an animal, stop trying to save it.”

Have you noticed how many socialist solutions involve death? Communism wiped out a good 100 million people in the name of mandatory happiness. The green movement opposes overpopulation and therefore discourages breeding. Euthanasia is one of their holy sacraments. They think aborting a baby should be as easy as taking out the trash, and they”d rather put a dog down than see it hang out with a hobo.

As PETA battles WOOF in the Southwest, here in the Northeast we have the Audubon Society fighting farmers. Like PETA, the bird lovers have started with a conclusion. They see grassland birds such as the meadowlark get chewed up by hay mowers twice a summer and find this situation morally unacceptable. They”ve decided to restrict the farmers and prevent them from mowing. This has become law in many small towns, but this backward thinking ends up exacerbating the problem. The reason grassland birds are there in the first place is because they thrive on farmland. These birds don”t do well in forests and without clearing, you can”t have clearings. And by restricting farmers from mowing hay, you are forcing them to switch to corn. We no longer have to worry about destroying the eggs because no eggs are being laid.