Partying With the Right Side on the Left Coast 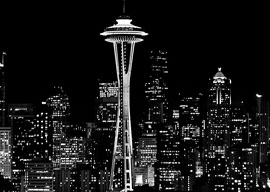 I am just recovering from a splendid weekend in Seattle, a conference organized by my good friend Guy Wolf, editor of an alternative-right blog.

(You never know how people will react to having their names publicized in this context. To be on the very safe side, I have substituted pseudonyms of my own devising for all the actual persons at the conference, except for one I have identified by her blog.)

So there we were at a hotel in Seattle, thirty-odd adherents of the politically incorrect, race-realist, diversity-skeptical, alternative right: some academics, some blog proprietors, and some interested citizens.

It was a very warming and encouraging experience. I tend to think of the alternative right as an impotent splinter group, like those of the Trotskyites I used to hang out with in my London college days. Some individual Trots ended up in senior political positions, but Britain never had a Trotskyist government.

The Seattle crowd’s vigor, conviction, and sheer intelligence had me rethinking that. There were no dopey Trot-type ideologues here chewing over arcane points of political philosophy or the minutiae of old Politburo debates. (I mean the alternative-right equivalents thereof, which would be…oh, I don’t know: what Giovanni Gentile said to vex Benedetto Croce in 1925, perhaps.) These were thoughtful, very smart people, but they were practical-minded, by no means pettily ideological, and well up to date on US political developments. I came away thinking that the alternative right is a real thing, with real prospects for broader influence.

“I came away thinking that the alternative right is a real thing, with real prospects for broader influence.”

The presentations were very good. One of the academics, anthropologist Tom Clout, gave us a brilliant overview of current controversies about kinship recognition and its origins in natural selection, embellished with colorful anecdotes from his field work in Africa.

Another academic, who prefers complete, non-pseudonymous anonymity, brought us up to date on the latest researches in psychometry. S/he displayed complete mastery of the subject matter, firing right back at questions with comprehensive answers after no pause for thought at all. This always impresses the heck out of me. I like my lecturers to show the iceberg effect: to give me the impression that the matter in their presentation is the merest visible fraction of what they know.

Blogger Rob Przybykov broadened the scope with an excellent talk”I see he’s posted it on his blog”on parallels between obesity and addiction to pornography, with side trips into evolutionary biology, brain metabolism, and the “manosphere.”

A learned political scientist spoke on the uses and abuses of the term “fascism,” the subject of his next book.

Historian (mainly of science) Doug Fosnow called for the USA’s “red” counties to secede from the “blue” ones, forming a new federation. This was greeted with much skepticism by the audience, who noted that the “red” federation would get practically no seacoast. Did Doug really think such a secession was likely to happen? No, he admitted cheerfully, but anything would be better than the race war he does think is likely to happen, and it is intellectuals” duty to come up with less horrific possibilities.

And so we went on: informative and thought-provoking presentations, hearty debate in the Q&As afterwards, hotel food no worse than the average, and lively gossip around the dinner tables and bars.

I made the opening presentation myself, speaking on the history of, and prospects for, thinking about human biodiversity (HBD). Zack Duncan, who runs a prominent immigration-restrictionist website, said he would post my talk as an article if I could de-PowerPoint it down to ordinary text, which I have tried to do. (It’s harder than you”d think: There’s a mighty quantity of words in a 40-minute talk, way too many for a normal Web posting.)