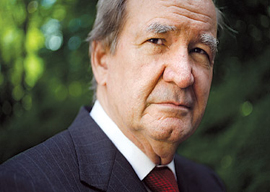 Has Pat Buchanan been fired from MSNBC, or hasn’t he? He hasn’t been seen on the channel since October, when his last book came out. (I reviewed it for Taki’s Mag here.) MSNBC president Phil Griffin said a month ago that Pat was being kept off the air because of things Griffin found objectionable in the book: presumably things such as Pat’s having lamented “The End of White America”—one of his chapter titles. A friend who met Pat on January 27th reports that Pat denied having been fired.

The MSNBC debacle is one more attenuation in the slow fading of Pat’s public career. He still has other TV gigs, but if MSNBC does not restore him, he is unlikely to get a media contract elsewhere that gives him as much visibility. Pat will have taken another step down in his gradual departure from the public stage. The man is 73 and has health issues. More decisively, large parts of the American public—including, obviously, Mr. Griffin—see him as a relic whose views are not so much shocking as incomprehensible, as if a courtier of James the First had appeared among us in doublet, hose, and ruff arguing for the divine right of kings.

Ah, well. As Pat’s close British equivalent Enoch Powell famously observed, all political careers end in failure. Pat’s career was, in its very American way, a glorious one. The details have been laid out in a striking new biography by historian Timothy Stanley: The Crusader: The Life and Tumultuous Times of Pat Buchanan.

“Pat’s career was, in its very American way, a glorious one.”

Stanley sensibly omits most of Pat’s childhood and youth, which Pat covered thoroughly in his own 1990 memoir Right from the Beginning. By page 36 of The Crusader, Pat is working for Richard Nixon. There follows a breathtaking 320-page canter through US national politics toward the end of the 20th century, culminating in Pat’s disastrous 2000 run for president under the Reform Party banner. He won 0.4 percent of the popular vote.

The highest point was Pat’s victory over Bob Dole in the 1996 New Hampshire primary. It is still thrilling to read about:

At the Buchanan office in Manchester, there was a riot. The media turned up from nowhere and tried to break in. They pushed their way up the narrow staircase, squeezing against the walls, waving boom mics….At the front was Larry King, shouting, “Where’s Pat? Where’s Pat?” Pat was world news. He made the front page in London, Tokyo, and Moscow….This was the high tide of the Middle American Revolution.

Establishment Republicans were furious. The neocons had already captured key strategic points in the party and were aggressively pushing their programs of globalization, demographic replacement, and military aggrandizement. How dare Pat speak up for economic nationalism, American citizenship, and the return of our troops from Germany, Italy, Korea, and Japan? Pat was “pseudo-populist” (Bill Kristol); he was “exclusionary” (Jack Kemp); he was a “segregationist,” guilty of “Jew-baiting” and “queer-bashing” (David Frum); he was…whatever (Bob Dole).

Four years earlier, at the 1992 Republican Convention in Houston, Pat had scored his greatest oratorical triumph. GOP moderates followed with a shameful betrayal of him. Timothy Stanley tells the story very well.