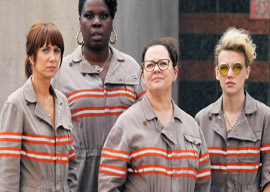 Do you ever get the impression that our endless identity-politics culture wars have less to do with the liberation of their ostensible beneficiaries than with the further career advancement of a small number of individuals whose careers were already doing pretty well?

For example, consider the hoopla over how it’s your social duty to attend the big-budget remake of the 1984 hit Ghostbusters because the well-worn roles are filled this time by actresses.

And yet the writer-director who finally got the privilege to bring back to the screen this prized boy toy franchise after 27 years is…a man. In fact, he’s the King of Women’s Comedy, Paul Feig, previously director of Bridesmaids, The Heat, and Spy.

Yet Feig is not exactly the second coming of George Cukor, the old-time gay filmmaker with a genius touch at directing women.

Instead, Feig is a regular guy. In fact, he might be perhaps the single most demographically average creative decision maker in the entertainment industry: middle-aged, straight, white, half-Jewish and half-gentile, male, and connected.

He’s been affiliated since the 1990s with the Apatow Gang that has dominated movie comedies over the past decade. With Judd Apatow’s assistance, Feig created the legendary 1999 failed sitcom Freaks and Geeks, which featured Seth Rogen, James Franco, and Jason Segel.

Like all of Apatow’s boys, Feig is fairly talented. Thus his new Ghostbusters has some big laughs; more, in fact, than the rather low-key original. (The new movie’s notoriously unfunny trailer left out most of the good jokes for unexplained reasons.) The film looks almost as expensive as its $144 million budget (an inordinate amount for a comedy). And it has that wonderfully catchy old theme song by Ray Parker Jr. So your two hours in the movie theater would be pleasant enough.

But is switching Ghostbusters from guys to gals as simple of an idea as it sounds?

“Is switching Ghostbusters from guys to gals as simple of an idea as it sounds?”

In reality, transmuting movies across identity categories is a lot of work to do well. For example, consider one of the least politically sensitive changes: male age. Screenwriter William Goldman wrote in Adventures in the Screen Trade, his much-appreciated advice memoir:

A friend of mine is struggling now with an adaptation of a novel in which he was instructed to keep everything just the way it was, except for one small change”make the main character, who is sixty-six in the book, forty years old…. A change like that is agony. Because you can”t really keep anything in the book. The problems and tensions of the novel shift epically when you lop a quarter century from the hero’s age.

Male to female is at least as big a change, but Feig wasn”t willing to do all that much work on a property that appealed to him for its prototypical boyishness.

Ghost stories, such as Hamlet, A Christmas Carol, and Ghost, traditionally appealed to female audiences because they are so often about unresolved relationships. The innovation of Dan Aykroyd and Harold Ramis” 1984 Ghostbusters script, however, was to drop all that touchy-feely stuff and instead portray ghosts from the masculine perspective of science-fiction world-building.

This idea supercharged the weaponry with which the four uniformed heroes stand shoulder to shoulder to shoot ghosts while making sure to never cross the streams. Therefore, the franchise moved an ungodly amount of toy merchandise and videogames over the decades to little boys.

Not surprisingly, Target already had the new toys marked down even before the movie debuted. Little boys are extremely sexist and little girls aren”t interested in guns or vehicles.

But what about the movie? The new version, while amusing enough (it enjoyed a moderate $46 million opening weekend), is also almost instantaneously forgettable, mostly because Feig didn”t bother adapting this extremely boyish property for his female cast.

Ironically, feminist dogma lets Feig get away with his guy interests. Instead of putting in the hard work to make a movie about how women would actually react in this situation, grrrl-power rhetoric allows Feig to just remake a movie he loved as a teenager without adding much in the way of icky girl stuff.

For example, Feig doubles down on the pseudo-physics bafflegab in the original without considering that modern women prefer the life sciences. While women have won six Nobel Prizes in Physiology or Medicine in this century, no woman has won a physics Nobel since 1963.

Why? Physics is the death science. When Robert Oppenheimer invented the atomic bomb, he thought to himself, “Now I am become Death, the destroyer of worlds.” Not many females have ever felt that sounded like an awesome reason to become a physicist. But trust me, a lot of males have.

Therefore, in Feig’s purported female-empowerment movie, a male actor, Chris Hemsworth, cast as the ladies” stupid, lazy, but very handsome receptionist, winds up carrying the film comedically. (Also, as the Bloombergian mayor of New York, Andy Garcia is quite good.)

The women stars don”t fare as well under Feig’s control.

Feig gives poor Kristen Wiig, in the central role pioneered by Bill Murray, virtually nothing of interest to do. Murray’s Dr. Peter Venkman”a scientist with the soul of a game-show host, a con man who is also a natural leader of men“is one of the great comic characters in movie history. It was the perfect role written for him by his friends Aykroyd and Ramis to suit his strengths.