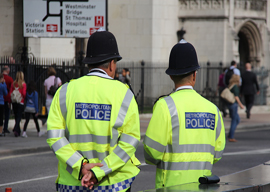 Some of you oldies will never believe this, but London is no longer the place of The Blue Lamp and other black-and-white golden oldies that were made in the Shepperton and Elstree studios by the great Rank and Korda organizations. During the postwar years, with rationing on and the empire still unraveling, England made some of the best movies ever. They were intelligently scripted, underplayed, and beautifully acted by thespians who had learned their craft on the stage. The one thing I remember was the portrayal of the fuzz: Cops were always shown as honest, polite, and trusted by John Q. Public.

Well, that was the movies, not real life. But was it? Unfortunately I am old enough to have lived in London back then, and the police were, along with the Church and the Monarchy, an institution every British subject proudly looked up to as incorruptible and unique. But times change, so you can imagine my surprise when I read about something that took place in London during the last week of August, and is the reason I brought up The Blue Lamp and the fuzz of yesteryear. Two bobbies, a male and a female, were trying to arrest a suspect, a powerful black man whose name turned out to be Nanikutomisa Mpelenda, 25, in East London, while a large crowd watched. As the cops struggled, the largely white crowd cheered the suspect on with cries of “Go on, son,” encouraging him to escape. The man possessed a firearm, whereas the cops did not. He was a drug dealer.

“The mythical Dixon of Dock Green must really be trying to get out of his grave with news such as this.”

My only reaction was, so what else is new? The psychic debris emanating from America and Black Lives Matter is now firmly attached to British life. The mythical Dixon of Dock Green, the avuncular policeman who is universally loved and respected by citizens and bad guys alike, is no more. Thanks to Hollywood, the television studios, and the media, the cops are now the bad guys and the criminals the good ones. And it gets worse. British police officers are promoted because they obey sociological jargon so-called experts throw at them, things like “hate crimes”—whether a wolf whistle in the street or an offensive tweet. Political correctness is now far more protected by cops than innocent people going on about their business. (Shoplifting, incidentally, is now hardly prosecuted, and has become an open invitation to break the law.)

The government claims it does not have the funds to safeguard the people, but ignores the fact that billions of pounds are spent on a wasteful overseas-aid budget. PC lives. In the meantime, London is now referred to as the Wild West, with knife crimes committed daily and the death toll up to this summer surpassing that of New York City. The perpetrators are mostly African and Somali gangs, but cops in London are billeted in safe areas in order to protect the LGBT community, which is not threatened by anyone. PC strikes again. Rural towns are no better. They are targeted by drug dealers who are mostly Eastern European—meaning Albanians, Serbians, and Romanians—and extremely violent. Incredibly, rural police stations are closing at an alarming rate and there are no visible bobbies anywhere.

Prosecutions in Britain have now reached an all-time low despite crime hitting a record high, with a 7% drop in prosecutions and an 11% rise in crime. Five and a half million crimes were recorded. Still, Theresa May’s government allows an imam in Manchester to continue to preach hate against the British state, while pursuing Boris Johnson for making a joke about burka-wearing women looking like letter boxes. One couldn’t make it up, as they say. (The imam in question had encouraged the bomber who killed 22 people—many of them children—at a concert in Manchester last year.)

Yet again, it gets far worse. Up to 1,000 children may have been abused, some as young as 11, all said to have been drugged, beaten, and raped over a 40-year period in Telford, but it was covered up or ignored by the police because the perpetrators were all Muslims. Social workers were aware of the abuse, but it took police a decade to launch an inquiry into child prostitution in the Telford area. The mythical Dixon of Dock Green must really be trying to get out of his grave with news such as this.

And as icing on the PC cake, an Oxford University professor, John Pitcher, was told he must retire to make room for “diversity and intergenerational fairness,” whatever that bullshit means. And on it goes. People are leaving London because they feel unsafe and unprotected by the cops. Criminals are moving in. One woman wrote a long article in the Telegraph about how living in Los Angeles is heaven compared with the violence of London. Had I read that long ago I would have advised a good shrink, but now I am starting to feel like her. Except I’d rather go to Chicago during a race riot than El Lay. Too many Sammy Glicks over in that sunny place for very shady people. (Sorry, Mr. Maugham.)