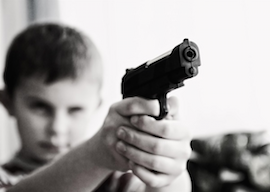 When a diagnosed schizophrenic who’d been prescribed antipsychotic medicine plowed into a crowd of “peaceful protesters”—who were, in fact, illegally blocking a street—and killed a woman in Charlottesville, VA on August 13, the perpetually self-discrediting establishment media seized on this incident as proof that Donald Trump and all his supporters were murderously violent Nazis.

Last week when Trump held a press conference and stated the truth—that there had been violence on “both sides” in Charlottesville—the ideology-blinded establishment press screamed bloody murder.

When a female reporter asked him to denounce the Alt-Right, he flipped the script:

There was collective face-palming and head-shaking and finger-wagging and pearl-clutching and vapor-sniffing and diaper-shitting at his comments—not only among the resolutely leftist press, but among “conservative” placemats such as Mitt “The Loser” Romney and Little Marco Rubio. As is the wont of people who place their half-assed public moral posturing above the truth, no one bothered to factually refute what Trump said. Ideologues’ brains come Saran Wrapped with the presumption that they occupy the moral high ground; therefore, anything that contradicts their narrative is innately “evil” and cannot possibly be factual, so there is no sense in even attempting to argue facts.

“Here’s the difference between words and violence: One involves words, the other involves violence. Glad I could clear that up.”

Of course there was leftist violence in Charlottesville. For at least the past decade in America, there seems to be leftist violence wherever a non-leftist attempts to speak publicly. They burned, smashed, and assaulted everything in their path at nearly every Trump campaign rally, while there was no hint of such right-wing behavior at Bernie Sanders and Hillary Clinton rallies.

Based on the transparently fraudulent idea that publicly articulating any non-leftist ideas is equivalent to literal violence—or at least it will inevitably lead to violence if the speaker isn’t silenced and crushed—they justify all the cement-filled bottles and human feces they toss at all the imaginary “fascists” and “Nazis” they see wherever they turn. Their brains welded with endless propagandized horror about Hitler’s Six Million, they either don’t know or don’t care about Marx’s Hundred Million. This somehow allows them to see mere words as “violence” and their literal violence as mere “justice.” That’s how insanely and arrogantly hypocritical they are.

Here’s the difference between words and violence: One involves words, the other involves violence. Glad I could clear that up.

Watch this video that shows stoic would-be “Unite the Right” rally attendees being taunted and heckled and poked from all sides as they try to safely get back to their vehicles and vamoose. Then try to tell me that the “Nazis” were the only aggressors.

Look at this footage (halfway down the page) of a TV reporter getting clubbed in the head by an Antifa goon in Charlottesville and tell me the violence only came from one side. And listen to how Antifa attempts to justify sending the man to the hospital to get four staples in his head:

Due to the intensity and context of this time people are very scared of white men running full speed at them with iPhones as this is the exact behavior of a white supremacist trying to out identity of people of color and anti fascists in order to invoke fear…. He intentionally ignored the denial of consent, still without identifying himself (though we still wouldn’t care), which was a threat to safety and should be considered in a context of perpetuating rape culture.

As far as I can discern, the reporter was only trying to film the festivities. Being a reporter for a TV station anywhere in America in 2017, odds are that he leans left. But since Antifa didn’t like someone filming their animalistic behavior, he magically transformed into a “white supremacist” who endorsed “rape culture,” so there was nothing wrong with splitting his skull open.

Beware of anyone who claims the moral high ground, because they will use their self-righteous delusions to justify the most depraved cruelties. In fact, fuck the idea of the “moral high ground” altogether. In historical practice, that’s nothing more than an illusion designed to make Church Ladies feel better about themselves. Seek the factual high ground. And the fact is, there was plenty of leftist violence in Charlottesville.

Even worse than the leftist rioters’ self-justifications are the justifications of a resolutely ideological press that enables them to get away with violence. In a largely sympathetic profile of Antifa, CNN went Full Orwell with a headline that briefly included the phrase “peace through violence.” (The headline was amended after someone apparently alerted CNN that it made them look insane.)