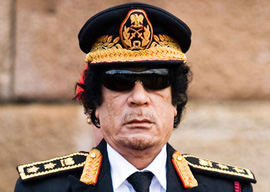 The two big books of the moment are Steven Pinker’s The Better Angels of Our Nature: Why Violence Has Declined (which I reviewed in the November issue of The American Conservative) and Pat Buchanan’s Suicide of a Superpower: Will America Survive to 2025? (which I reviewed in VDARE). Pinker argues that the future belongs increasingly to peaceful cosmopolitan globalism, while Buchanan claims that ethnonationalism’s universal appeal can ultimately lead to national stabilization.

Pinker, the noted Harvard psychology professor, contends (among much else in his 832 pages) that there exists a civilizing process that makes people behave less violently over time.

Granted, Kathafi’s end turned out not to be not quite as Facebookish as the sort of National Defriending that promoters of the Arab Spring had implied. The whole NATO Highway of Death routine followed by militiamen (apparently) executing him point-blank seems a little pre-Twittery.

“How nonviolent is cosmopolitan internationalism in practice? The colonel found out in March, when the leaders of France, Britain, and America agreed to kill him.”

“…the Iraqis had hitched Regent Abd al-Ilah to the back of a truck and dragged him through the streets of Baghdad, with people in the crowd screaming in delight and dashing up and cutting off pieces of Abd al-Ilah for souvenirs, first his sexual organs….Then Abd al-Ilah’s body without the arms and legs was hung from a balcony and the crowd went wild and stabbed it with pointed sticks, and people climbed up and whittled off slivers to celebrate.”

So score one for Pinker’s civilizing process: Souvenir-hunting Arabs in 2011 excitedly snapping cellphone pictures of their former dictator’s battered corpse are more civilized than 1958 Arabs carving off chunks of carcass.

Yet Buchanan is right in that ethnonationalism helped fuel Libyan discontent. Quathafee’s 1969 coup came in the age of Nasserite pan-Arabism, or ethno-internationalism. But the colonel soured on his fellow Arabs and kicked off a bizarre pan-Africanist project to become black Africa’s leader. To increase his popularity in Africa, he imported a million or more sub-Saharan immigrants, which didn’t please his North African subjects. Fittingly, his loyalists’ last redoubt was the Ouagadougou Conference Hall, named, with Gathaphee’s characteristic disdain for spellability in Western alphabets, for his ally to the south, the former Upper Volta.