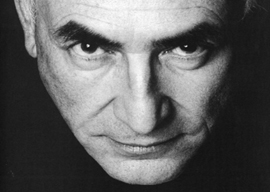 NEW YORK—About once every hundred years the French nation presents America with a monumental gift.

In 1781 it was 29 warships, 3,200 sailors, and 4,500 soldiers who hooked up with George Washington at Yorktown and blasted General Cornwallis to smithereens.

In 1886 it was La Liberté éclairant le monde, the monstrosity of a sculpture that we couldn’t pronounce and so came to be known as the Statue of Liberty.

In 2011 the French gift to America is Dominique Gaston André Strauss-Kahn, the savior of tabloid journalism as we know it.

Strauss-Kahn—or “Le Perv,” as he’s universally known now that the New York Daily News beat out the New York Post in the heated competition to assassinate his reputation in the fewest possible headline characters—is currently being held under 24-hour armed guard in a $14-million townhouse on a street named after that great libertine and lover of all things French, Benjamin Franklin, and I can say with some assurance that we’re planning to keep Le Perv on Manhattan Island for a long, long time.

Strauss-Kahn has already done more for the economy than all the stimulus and bailout money lavished on Wall Street over the past three years. Just when the American journalism industry seemed on the brink of disaster, with publications failing left and right, Le Perv has become the tabloid story that will end up paying for at least 50 new Rupert Murdoch employees alone. Already le scandale de la femme de chambre threatens to eclipse both the Michael Jackson Moppet-Fondling Trial and the Conspiracy to Kill Princess Di as the greatest evergreens of the past 20 years. You might have to go all the way back to O. J. Simpson to recall an ever-evolving story this hot, but this one is much better: O. J. was unknown in Europe and too much of a West Coast crybaby anyway. “DSK” not only reverberates in New York and Paris, but we have Schadenfreude abounding in London and every Third World capital the International Monetary Fund ever held hostage.

What’s strange is that Strauss-Kahn and his supporters, including a wife the tabloids invariably describe as a “millionaire journalist” (implying she’s the equivalent of an aristocratic FedEx delivery man), don’t seem to understand what’s going on.

First of all, his name alone is an enchanted forest of easy bigotry: “Dominique Strauss-Kahn,” even without the “Gaston” and the “André,” is simultaneously French, German, Jewish, effeminate (as opposed to the more masculine “Dominic”), hyphenated, privileged, wealthy, and evocative of the burly lyric-baritone rapscallion in an Andrew Lloyd Webber musical who beats street urchins and feeds them gruel. Add to this the fact that he was until recently the head of the IMF, regarded by farmers in Iowa as a Fifth Column of the Trilateral Commission, then that he’s a card-carrying socialist who, as a youth, was a card-carrying communist, and you have a prepackaged Hungry Man Dinner for every Francophobe with a laptop. If the name were any easier to pronounce or remember, it would be used as the villain on a Disney World thrill ride:

Enter the dark caverns of the Strauss-Kahn IF YOU DARE, then experience 5g of centripetal power as the highest, longest, fastest, and most insane German roller coaster in the world beats you up like a West African domestic!

Of course, we would have to vary the theme at Disneyland Paris.

Meanwhile, Le Perv has obliged the media by occupying a “house arrest” residence that: A) has only one entrance; B) has only one tenant (Le Perv and family); and C) requires constant visits by delivery people, all of whom are happy to describe their encounters and/or what they delivered. The Post has, of course, established a permanent bureau on the street outside. Speaking of those deliveries, early choices included Lean Cuisine frozen dinners, skinless chicken breasts, and Poland Spring water, but later ones involved $300 takeout from gourmet restaurants that would have delighted Marie Antoinette. Thanks to the Post, we know that Le Perv failed to tip the deliveryman on a six-bag grocery order. Why? There can only be one reason: because he’s French!

“Finally we have, in one human being, the essence of everything we love to hate about the French.”

Finally we have, in one human being, the essence of everything we love to hate about the French. Strauss-Kahn is not merely a dirty old man with a Pepé Le Pew accent—although he is that—but he’s a punching bag for every American waiter who ever got stiffed by a French tourist and every American tourist who ever got snubbed by a French waiter. When Strauss-Kahn was hauled before the magistrate for his bail hearing, he showed up with an army of lawyers and made faces throughout the proceeding as though to say, “I am being paraded before the rabble.”

Yes! cried the press corps. He has no clue where he is! He’s going to play the role to a T! Vive la France!

Lest you think I’m exaggerating, just a few examples from the first two weeks of Strauss-Kahn coverage:

FROG LEGS IT! (Post headline when bail was granted)

What Gaul! (Post describing his claim the sex was consensual)

His defenders in Paris—including Jack Lang, best known in the US for being the culture minister who instituted quotas limiting the number of American movies that could be shown in France, thereby making the world safe for Gérard Depardieu psychodramas filmed with a fisheye lens—were outraged by Strauss-Kahn’s treatment, beginning with his Perp Walk, which I thought was quite mild by Manhattan standards. Apparently Le Perv failed to avail himself of any shaving utensils that might have been available at the Special Victims Unit in Spanish Harlem, where he had spent two days being vacuumed for DNA and trotted out in a lineup so that the maid could ID him. When you’re 62 and have thinning white hair and bags under your eyes on a good day, you don’t really wanna go before a hundred cameras without your La Roche-Posay facial moisturizer treatment.

But DSK fans were even more incensed by the fact that he spent several days on Rikers Island, even though the warden made sure he had a private cell, probably so that no one from the Aryan Brotherhood with a snake-eye-dice tattoo could shank him into the kind of pain zone normally only experienced by directors at a Cannes Film Festival press conference. The implication was that diplomats and/or aristocrats and/or rich French guys should be released to the Hotel Pierre security staff or something, not made to share Sloppy Joes with guys named Flava Loaf Skinny Trigga. They were assuming that there must be some other jail for Europeans pulled off Air France jumbo liners ten minutes before they would have zoomed into international airspace, bound for Polanskiland.

Again, there was apparently no understanding that this was a lose-lose for Strauss-Kahn no matter how the justice system ended up dealing with him.

And yet we do have this little thing called the presumption of innocence. This means that, no matter how French you are, we will allow you to be treated as American in the courtroom, and we won’t use your Frenchness against you. To prove it, I’m going to take Strauss-Kahn’s lawyers at their word when they say that the sexual encounter in Room 2806 of the Sofitel on 44th Street on Saturday, May 14, 2011, was “consensual,” and we’re going to go through each stage of the…what should we call it?…The Encounter.