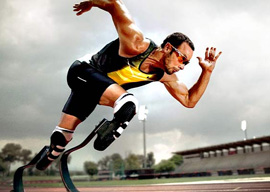 Double amputee Olympic sprinter Oscar Pistorius has been charged with murdering his girlfriend, demolishing a sweet sporting mythos that had proved inspirational for physically disabled individuals and the institutionally disabled nation of South Africa.

Pistorius, nicknamed “Blade Runner” for the carbon-fiber prosthetic attachments replacing the legs that were amputated before his first birthday, was said to be the most admired South African after Nelson Mandela. Known as “the fastest man on no legs,” he doggedly overcame congenital flaws to represent South Africa in the 2012 London Olympics. He claims his motto is “You’re not disabled by the disabilities you have, you are able by the abilities you have,” and a tattoo on his back features this passage from Corinthians: “I do not run like a man running aimlessly.”

“Oscar was our good thing,” wrote Sarah Britten of Johannesburg’s Mail & Guardian. “He was our story, a hero who, for all his flaws, overcame the odds and exemplified the greatness of the human spirit.” South African expat Donald McCrae wrote for the Guardian: “Pistorius was a gleaming symbol of South Africa’s past resistance to adversity, and of its future embrace of equality. His life-story was often told as a parable of hope that the country really was in the process of remaking itself after apartheid.”

“Rather than the second coming of Mandela, Oscar Pistorius is looking more and more like South Africa’s O. J. Simpson.”

That all changed on Valentine’s Day. Rather than the second coming of Mandela, Oscar Pistorius is looking more and more like South Africa’s O. J. Simpson.

This is what’s known so far:

On the early morning of February 14, Pistorius fired four 9mm bullets at his girlfriend, model Reeva Steenkamp, hitting her in the head, arm, waist, and hand. At least three of these bullets were fired at Steenkamp through the door of a bathroom in which she had apparently locked herself. Police refuted initial rumors that Pistorius had mistakenly shot at an intruder, citing a lack of evidence of forced entry at his home. The back of Steenkamp’s skull was also crushed, possibly by a bloody cricket bat found at the crime scene.

Before calling paramedics, Pistorius reportedly called his best friend Justin Divaris and confessed to the shooting. When Divaris arrived at the crime scene, he says he saw Pistorius repeatedly sobbing, “My baba, I”ve killed my baba. God take me away.” When paramedics arrived, Steenkamp was still alive but gargling blood from her injuries. She died at the scene.

Although they were known as South Africa’s “golden couple,” Pistorious and Steenkamp had only been dating since November. On the day she was killed, Steenkamp had been scheduled to deliver a motivational speech against domestic abuse at a local school, citing her alleged experiences with a boyfriend prior to Pistorius.

Only days before her death, Steenkamp had written the following on her Instagram page:

I woke up in a happy safe home this morning. Not everyone did. Speak out against the rape of individuals in SA. RIP Anene Booysen. #rape #crime #sayNO.