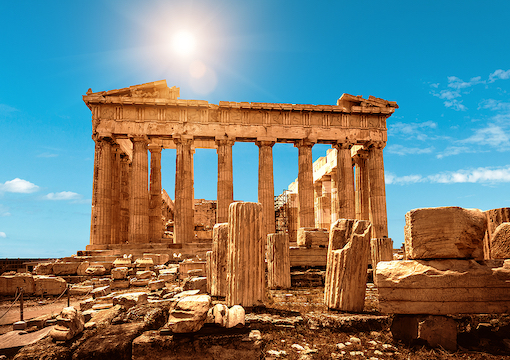 I write this under an Attic sun reflecting from the marbles of the Acropolis and into my living room. This was once the center of Western civilization, its stem just hundreds of feet from where I’m standing. Individual liberty and democracy first flourished right here, when 300 Spartans gladly went to their inevitable death against as many as 100,000 Persians in order to preserve free thought. Because of their sacrifice and those of many others following their example, fifty-some-odd centuries of triumph and tragedy have created a rich historical and cultural heritage that has indelibly stamped its imprint on the way Greeks think. No modern state believes so strongly in the continuity of its national existence from the dawn of prehistory to the present.

“Just like in America,” cracked a joker friend of mine with whom I was walking around a devoid-of-tourists Acropolis. “Yeah, just like in America,” I answered. We were looking at the statues surrounding us and we began to laugh. “God, how I’d love to see some of those so-called protesters in America try and come here and bring down the statues of slaveholders…” It was wishful thinking on the part of my friend, but others in our group didn’t even give it a thought. The consensus among us is that America is sick, its leaders groveling to the lowest dregs and denominator, its future in doubt. These are good men, successful and civilized, and until now very pro-American. But they are all Greek, and unlike in the U.S., where values are based on a shared story, Greek values and beliefs are based on a shared ethnicity and religion. Because of that, we do not turn against our heroes and do not wish to burn down our neighbors’ homes. The bullying and manipulative policies of the illiberal and identity-obsessed American left are nonstarters over here. Seventy-five years ago, communist guerrillas with Stalin’s help tried to take over through force of arms, but with British and American aid the Greek army prevailed and Greece remained free. There have been lots of bumps along the way, Greece’s volatile history being unmatched by any other European country, but one force helped maintain the language and culture of the Greeks, and that was and is the Greek Orthodox Church.

“Walking around the ancient ruins of the Acropolis makes the mind reel at the disposability of American culture.”

Here’s a brief historical background: After the glorious centuries of antiquity, the Greeks became part of the Eastern Roman Empire with its opulent capital Constantinople founded by Emperor Constantine in 330 AD. Byzantium, as the empire was known, held parts of Egypt, Syria, Asia Minor, parts of Italy, and most of the Balkans. In this huge area, Greeks and their language prevailed, along with their Christian beliefs. The empire was “Hellenized” for 1,000 years—until 1453, when it fell to the Turks, with 400 years of Turkish domination following. Greeks revolted in 1821 and won their independence in 1827.

The Greek language and culture survived 400 years under the yoke of Islam because Greek churchmen were for a period the only educated people throughout the Ottoman Empire. The Greek Church remains the most respected institution in Greece, and during natural disasters or wars, priests are in the forefront. I cannot recall a single incident of a church desecration by a Greek, and I’ve been around for four score years. Which brings me to New York City, where in July three men (security cameras showed their faces clearly) broke into a church, proceeded to daub paint, and defecate. I didn’t bother to tell my friends at the Acropolis about this latest outrage, for Uncle Sam’s sake.

So if Greece is such a great place, why have so many thousands upon thousands of Greeks immigrated to America? Easy. Until now, America lived up to its reputation as land of the free and of opportunity. Greece was a poor country—fruit and olives and some tobacco—situated between east and west and part of the volatile Balkans, influenced by the great powers in its foreign policies. America was the land of opportunity, and in many ways still is. But I know many Greek-Americans who’ve had enough and are returning to their villages. American life has become untenable, especially in big cities where BLM thugs are running the show.

Walking around the ancient ruins of the Acropolis makes the mind reel at the disposability of American culture. Nothing is sacred and everything is replaceable. How dare this scum cast aspersions on Robert E. Lee? On George Washington and Thomas Jefferson? How dare Hollywood scum make a TV series on a big lie by Philip Roth showing the great Charles Lindbergh to be a Nazi? How can cops sit on their hands while the lowest of society spray churches and wreak havoc on innocent people’s lives?

So I come back to my friend’s suggestion and now it makes more sense: Why don’t these cowardly scumbags come over to Athens, to the Acropolis, where the monumental achievements of Athens and of Pericles are celebrated, where we are aware of the modern petulance that points out that women, children, slaves, and foreigners were excluded from participation in the democratic process, and try to teach us how wrong we are to still celebrate them? Please God, let them try.