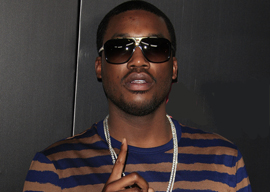 If you wanted to write a satire of leftist journalism, you could hardly do better than the sincere Sports Illustrated article on Meek Mill by DeAntae Prince. It concerns the friendship, meant to seem rather touching, between Sixers co-owner Michael Rubin and the jailed black Philly rapper. Much of the emphasis is on Rubin’s “efforts to liberate the rapper”—as if Mill were France under the Nazi occupation.

Mill is currently serving a two-to four-year prison sentence for repeated probation violations. With unintended comedy, Prince describes this as “legal complications due to constant travel and a rapper lifestyle that clashed with his probation obligations.” The evasion is palpable here. Imagine explaining to the IRS: “I didn’t pay my taxes, a legal complication, because doing so clashed with my lifestyle. I prefer spending my money on gambling and whores.”

However, “Rubin understands,” according to Prince, “that mistakes were made on Meek Mill’s behalf, and that he is not completely blameless.” The evasion is even more glaring, and funny, in that bizarre construction: “on Meek Mill’s behalf.” You see, Mill himself did not make the mistakes—including the initial crime, possession of an illegal firearm—rather, they were made on his behalf, that is to say, for him. Well, then, by whom? Also, in what sense is Mill blameworthy? Of course, these are not questions that matter to the illiterate Prince, for, like his inept editors, the man is not a serious journalist, but a typical scribbling ass.

“The common leftist point of view is essentially selfish, albeit obfuscated by such lofty terms as social justice and equality. ”

“He takes issue,” Prince says of Rubin, “with the heavy-handed jail sentence Meek Mill received, which largely stemmed from an absurdly long probationary period that dates back to a 2008 arrest.” Again, neither man considers the possible justice of the jail sentence and of the length of the probationary period. It’s simply obvious that the former is “heavy-handed,” and the latter, “absurdly long.” The logical implication is that, even though Mill repeatedly violated his probation, facing the consequences of doing so is wrong in his case.

“He’s been on probation as long as he’s been an adult,” says Rubin, dripping with pity, which his feeble soul takes for virtue. “He’s never really had more than travel violations for his job.” Not probation violations, but “travel violations,” we are told. Why, unhappy reader, reach for a Kleenex as you imagine Poor Meek! Or rather, free Meek, as the many signs say here in the City of Brotherly Love.

Rubin grew up in suburban Philadelphia, and owned three ski shops before he finished high school. Comparing himself with his locked-up friend, he says, “We come from different worlds. This stuff doesn’t happen in my world. It happens in his world, and that’s unacceptable.” I, too, come from suburban Philly, but not from the sort of background in which many people treat poor blacks as some sort of exotic animal, fit objects for all manner of well-meaning but deeply pernicious patronizing. Like most intellectuals, Rubin has had no experience of working-class life. It is this, along with the poor quality of his mind and weak character, that allows for his sentimental simplification of Mill. Like many people today, Rubin assumes that to come from poverty is to lack a sense of moral agency by definition. Still, one rather doubts that he would ever take such a perspective concerning his fellow Jews, some of whom are poor, or concerning poor Asians, for example. Poor blacks are unique in that they seem to merit pity and absolution where other peoples do not. There is a brutal and indeed racist value judgment behind this—perpetual victims, black people are essentially ignorant children in the moral domain.

Now, to be sure, there are many people in the world, especially among the poor, who, because of their social conditioning, do have a very impoverished moral frame of reference. Some, indeed, have no moral ideas at all. They may be bad, but they know not what they do. Yet the common beliefs—that the poor are intrinsically incapable of distinguishing right from wrong, or that they are necessarily bad at it—are relatively new in human affairs. One did not encounter them before the 1960s, for example.

That is because these fallacies ultimately derive from the feminine sensibility, which has come to exercise an unprecedented influence in the contemporary world. It was historically the function of women to soften the harsh effects of male authority. In the family, for instance, the mother exuded compassion and forgiveness, helping children to bear necessary male discipline and punishment. Yet in the modern era, and especially in our time, male authority, for reasons I have not the space to consider here, has become a source of incessant distrust and resentment. In turn, it has been effectively supplanted by the feminine sensibility. And while it used to have a vital function in the home, that way of thinking—or rather, feeling—is disastrous once it becomes the primary mode of moral evaluation.

The condition of black Americans affords the strongest evidence of that. Since nearly three-fourths of them grow up without fathers, it follows that a great many black children develop without learning any sense of legitimate authority. Now boys, like women themselves, don’t want to answer to women, who, as women, naturally exert tremendous power over men, first as mothers, and later as sex objects. So, blacks, who already have a tragic situation to endure and try to overcome, need strict, principled authority, which was common among them before the welfare state—the traditional black family was often more conservative than that of whites. What makes the lives of blacks even worse today are the endless excuses so many white leftists and fellow blacks make for them. The actual school-to-prison pipeline lies in the increasing unwillingness of public schools to teach black boys that they must be accountable for their actions. As Katherine Kersten put it in a City Journal article a year ago,

Racial equality has become the all-purpose justification for dubious educational policies. Equity proponents view “disparate impact”—when the same policies yield different outcomes among demographic groups—as conclusive proof of discrimination. On the education front, “equity” does not seek equal treatment for all students. Instead, it demands statistical equivalence in discipline referrals and suspensions for students of every racial group, regardless of those students’ actual conduct.