Petraeus and Benghazi: A Time for Truth 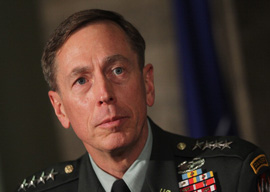 The stunning resignation of CIA Director David Petraeus, days before he was to testify on the CIA role in the Benghazi massacre, raises many more questions than his resignation letter answers.

“I showed extremely poor judgment by engaging in an extramarital affair,” wrote Petraeus. “Such behavior is unacceptable … as the leader of an organization such as ours.”

The problem: Petraeus’ “unacceptable behavior,” adultery with a married mother of two, Paula Broadwell, that exposed the famous general to blackmail, began soon after he became director in 2011.

Was his security detail at the CIA and were his closest associates oblivious to the fact that the director was a ripe target for blackmail, since any revelation of the affair could destroy his career?

People at the CIA had to know they had a security risk at the top of their agency. Did no one at the CIA do anything?

By early summer, however, Jill Kelley, 37, a close friend of the general from his days as head of CentCom at MacDill Air Force Base in Tampa, Fla., had received half a dozen anonymous, jealous, threatening emails.

“The stunning resignation of CIA Director David Petraeus, days before he was to testify on the CIA role in the Benghazi massacre, raises many more questions than his resignation letter answers.”

Kelley went to an FBI friend who ferreted out Broadwell as the sender and Petraeus as the guy she wanted Kelley to stay away from.

Yet, learning that Broadwell was the source of the emails, that Petraeus was having an affair with her, and that the CIA director was thus a target for blackmail and a security risk should have taken three days for the FBI, not three months.

Was the CIA aware that Petraeus’ private emails were being read by the FBI?

For a matter of such gravity, this is normal procedure. Yet, The New York Times says the FBI and the Justice Department kept the White House in the dark.

Could it be that Obama and the National Security Council were kept ignorant of a grave security risk and a potentially explosive scandal that the Tampa FBI field office knew all about?

By late October, with the FBI, Justice and the White House all in “hear-no-evil” mode, an FBI “whistle-blower” from Florida contacted the Republican leadership in the House and told them of the dynamite the administration was sitting on.

Majority Leader Eric Cantor’s office called Mueller, and the game was up. But the truth was withheld until after Nov. 6.