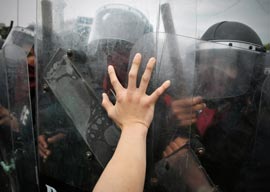 Born in America and raised in Britain, Adam Zamoyski is not a tenured university professor devoted to obscure subjects that appeal only to audiences of academic guilds. Nor does he write for a small readership. That’s why his books sell and his prose excites; he can narrate a compelling account while carrying an insightful thesis. His latest book, Phantom Terror, bears a subtitle that will cause libertarian ears to perk up: “Political Paranoia and the Creation of the Modern State, 1789-1848.”

Challenging the validity of modern states and their various arms and agencies is the daily diet of committed libertarians, but Zamoyski is not, to my knowledge, a libertarian of any stripe. Yet he challenges the modern State and its various arms and agencies, whatever his intentions or beliefs, and he refuses to shut his eyes to the predatory behavior of government. To appreciate the goals of his book, one must first understand how he came to his subject.

The story is simple: While researching, Zamoyski uncovered data suggesting that governments in the decades following the French Revolution deliberately incited panic among their citizens to validate increasingly restrictive policies. The more governments regulated and circumscribed individual freedoms, the more they took on the shape of nation states: geopolitical entities that had their roots in 16th- and 17th- century Europe but had not fully centralized.

“Zamoyski does not focus on any one state but moves from city to city, leader to leader, depicting how European governments staged rebellion for their own benefit.”

If there’s a main character here, it’s Napoleon Bonaparte. Zamoyski has written about Napoleon in previous books, including 1812: Napoleon’s Fatal March on Moscow (2005) and Rites of Peace: The Fall of Napoleon and the Congress of Vienna (2008). Having escaped from exile in Elba in February 1815 and suffered defeat at the Battle of Waterloo later that year, Napoleon, once the Emperor of the French, had been reduced to the status of a prisoner, stripped of his dignity and rendered militarily ineffective, his health quickly declining.

Tsar Alexander of Russia, seeing the great Napoleon neutralized, called for a holy covenant with Emperor Francis I of Austria and King Frederick William III of Prussia. For Alexander, who envisioned the State as the realization of a divine idea, the three united rulers reflected the trinitarian Christian God from whom their autocratic, quasi-sacred powers derived. Alexander believed that the unsettling of tradition and order during the French Revolution could be counteracted or cured by the systematic institutionalization of despotic government. First, though, the masses needed to be instructed in the manifest nature of revolutionary threats lurking behind every corner, in every neighborhood, among friends and family, in unexpected places.

And then came the police, a new body of official agents vested with administrative powers and decorated with the symbols and insignias of authority.  Until then the term “police,” or its rough equivalent in other European languages, designated minor officials with localized duties over small public spaces. European states lacked the administrative machinery of a centralized enforcement network besides the military, whose function was to conquer foreign territory or defend the homeland, not to guard the comfort, health, and morals of communities in disparate towns and villages. The latter task was for parochial institutions, custom, churches, nobility, and other configurations of local leadership.

In the wake of the French Revolution, with its ritualistic brutality, mass hysteria, and spectacular regicide, sovereigns and subjects began to accept and support the power of centralized governments to deploy political agents, including spies and informers.  According to Zamoyski, the growing police force”secret agents and all”was less interested in basic hygiene, sanitation, and safety and more interested in subverting the political clout and conspiratorial tendencies of local nobility.

To maximize their power, emperors and government ministers gave color to grand falsehoods about their weakness. Only in their exaggerated vulnerability, catalyzed by true and imagined Jacobins, Freemasons, Illuminati, and other such bugaboos, could they exercise their strength.  Seizing upon anxieties about civil unrest, rulers cultivated in their subjects a desire for police protection, supervision, and surveillance. Conspiracy theories worked in their favor. Francis ordered his police to be vigilant about the spread of Enlightenment ideas; he enacted censorship measures by which people disciplined themselves into obedience, leaving the police to serve, often, as mere symbols of control.