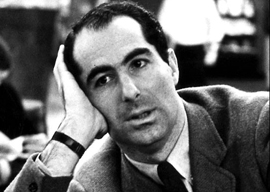 Even as a septuagenarian, Philip Roth can’t seem to stop offending the kind of people who make it their business to be offended all the damn time. The latest case in point: the very public and ill-tempered resignation of feminist writer Carmen Callil from the Man Booker Prize committee in protest against the award going to Roth. Huffing like Margaret Dumont in an old Marx Brothers movie, Ms. Callil declared that “I don’t rate him as a writer at all” and questioned whether anyone would still read his novels in twenty years’ time. She opined that reading his novels can make a reader feel as though Roth were “sitting on your face and you can’t breathe,” causing earnest literary critics across the world to giggle uncontrollably.

Roth has long been derided and disliked by the feminist literary community for his unreconstructed phallocentrism, if that’s even a real word. Ms. Callil quickly went into damage-control mode after her initial comments were seen as being needlessly ungracious by claiming that the real issue was not Roth’s alleged misogyny, but his American citizenship. Writing in Britain’s Guardian, she clarified that she felt the prize should have gone to a non-North American contender. She argued that Roth’s reputation as a walking penis did not inform her decision, but instead her concern that a more culturally diverse set of writers be acknowledged.

“Roth is acutely aware of the cultural shift that has seen the humorless, uptight moralists and censorious busybodies moving from the right to the left.”

Roth has been an amazingly enduring figure of contempt for public morality’s righteous defenders for over half a century now. His ability to piss people off remains admirably constant, from the Eisenhower era’s uptight, bow-tied arbiters of good taste to today’s politically correct apparatchiks. When his volume of short stories detailing lower-to-middle-class Jewish American life in the 1950s (Goodbye, Columbus) was released, he was denounced from synagogue pulpits (or whatever they call pulpits in synagogues) and spat at by rabbis on the streets because he had dared to portray Jews as flawed, ordinary humans rather than icons of righteous humility. Apparently unfazed by the hostility and outrage that such a comparatively mild book of social observation aroused, he unleashed Portnoy’s Complaint, which ups the ante on community-offense matters considerably:

If this passage—part of the teenaged Portnoy’s frustrated rant against his oppressively close-knit family—was Roth’s idea of offering an olive branch to aggrieved community members, one can understand why he never pursued a career as a diplomat. Feminists didn’t much care for the book or its sex-crazed protagonist either, and there was plenty to offend mainstream Catholics and Protestants as well as Jews. But perhaps the ultimate offense was simply to serious literary and intellectual types who couldn’t believe that Roth would turn his back on his early novels’ earnest, Jamesian drama and choose instead to write a book about overbearing Jewish mothers, teenage masturbation, and threesomes while seeming to use the words “cock” and “cunt” 20 times per page.