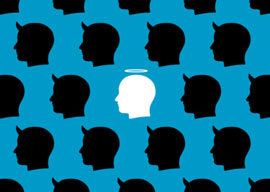 It’s easy (and appropriate) to laugh off something like record “backmasking.” Sure, Sammy Davis, Jr. and Jayne Mansfield were members of Anton LaVey’s Church of Satan”but note that Frank Sinatra and Marilyn Monroe were not. Esoteric “magik” is the pastime of runners-up, also-rans. The type the English call “anoraks.” (One such invented Wicca, for example.)

If you survived the era of Manson and Altamont and the Zodiac Killer, of Rosemary’s Baby and The Omen and The Exorcist, it’s awfully hard to shake the notion that something sinister had finally given up waiting, and slouched toward California to be born, sometime around 1964.

(If you missed”or doubt”it, I recommend Gary Lachman’s Turn Off Your Mind: The Mystic Sixties and the Dark Side of the Age of Aquarius, and the just-released Weird Scenes Inside the Canyon by David McGowan”although the latter should, by rights, be shipped with complimentary packets of salt grains …)

So now Catholics are congratulating themselves for preventing a handful of dingbats from giggling their way through an hour of masturbatory “shock the bourgeoisie (of the 19th century)” performance art.

If only they”d shifted themselves so decisively when something truly evil was going on inside the Church itself. Did Eucharistic processions encircle courthouses where gay “marriage” was being declared law? With the exception of abortion, the last issue the Church seemed to be on the right, very public, side of was SolidarnoÅÄ.

Sadly, Catholics are taking their cues from the culture at large instead of the other way around. The Harvard Black Mass diversion was simply more no-risk, too-little-too-late activism of the #BringBackOurGirls variety. Because Satanists aren”t a protected identity group (yet), the protesters didn”t have to worry about being called homophobic or misogynist.

Now, I agree wholeheartedly with my fellow Canadian blogger Kate McMillan: “Not showing up to riot is a failed conservative policy.”

But let’s choose our “riots” wisely. Watch and see if the same protesters show up outside a Catholic church when”not “if””some priest is obligated by the State to “marry” two men.