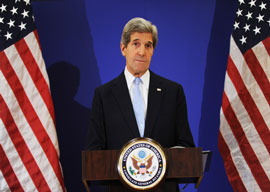 Now, about this Crimea thing: What I figure is, the top part of the Feddle Gummint got dropped on its head when it was little, and the rest is just asleep, or might as well be. We look to be ruled by a bus station of dumb-ass rich brats in a constant state of martial priapism. I can”t understand it. Out of three hundred million Americans, and lots of them went to school and can pretty much read, we get a slick minor pol out of Chicago for president and Pickle-Boy Kerry for Secretary of State, God knows why. Before that, we had Hillary, former First Housewife. Even God couldn”t explain that. And they throw their weight around just like they had some.

Now Obama’s threatening Russia about the Crimea. He may know where it is. I admit the possibility. We live in a strange world, and unexpected things can happen. What I can”t see is why he thinks the Ukraine is Washington’s business. Last I heard, the Crimea was hung off into the Black Sea by the Isthmus of Perekop like a hornet’s nest from a peach tree.

Why do we care about it? I guess if it gets to be part of Russia, Arkansas is next to go.

“God save us from little men with big egos and no judgment.”

Maybe it moved, though. Continental drift is a reality. It could be anywhere by now, maybe in the Gulf of Mexico. And even if it ain’t, I guess we need a war with Russia over a place that’s none of our business. I mean, I don”t see how we can get along without one.

Now, about being dropped on their heads: Pickle Boy has said of the Crimea, “You don”t just, in the 21st century, behave in 19th century fashion by invading another country on a completely trumped-up pretext.” I reckon he hasn’t heard of Iraq, either. The world is full of countries, and it’s hard to keep track of which ones you’ve wrecked.

I have a strategy. If we want to do those Russian rascals in and bring “em lower than dirt, we ought to arrange to have the American public elect their government. You know, on some kind of contract. Then they”d be ruled, like us, by a nursery full of pansies, milquetoasts, ethno-picks, growly featherweights, diesel dykes, and sorry rich kids who never got into a schoolyard fight. Russia would never recover.

One thing you learn in the schoolyard is never call a tougher kid’s bluff. It might not be a bluff. Uh-oh. This Putin guy, I hear they call him Vlad the Hammer: I bet there’s a reason. And Pickle Boy looks to me like a bug on an anvil. It’s Little Lord Fauntleroy calling out Mike Tyson deep in the “hood. Where Mommy can”t help.

I see that Genghis Obama has sent a destroyer, the closest he can come I guess to a Golden Horde, to the Black Sea, grrr, woof. It’s going to conduct military exercises”push-ups, maybe. Now, that’s going to frighten Vlad. I guess a sense of humor is a good thing in a president. Maybe he can amuse Putin to death. I mean, by all the gods and little catfish, what does he think a tiny irritating boat like that is going to do”torpedo the Crimea? It doesn”t float, Barack. It’s stuck to the bottom. You can”t sink it.

To put it simply enough that even the hair-salon Napoleons in the Yankee Capital might be able to understand, but most likely won”t, don”t make threats that the other guy knows you can”t follow through on. This idea is called “brains,” or sometimes “self-preservation.” Them days is gone when Washington could send the bathtub toys pretty much anywhere in the world and everybody would fall on his face and say, “Yassuh, bwana, yassuh.” Any third-grader in a country school in Georgia can see how things stand: Pickle Boy and the Jellyfish can: (1) start a shooting war with Russia; or (2) back down and get laughed at by the whole world. Ain”t any other choices that I can see. God save us from little men with big egos and no judgment.

Now, I read a lot of history. It’s because I don”t have to spend all my time getting elected and posing for cameras and lying. A patch of history I”ve always liked is World War I. It teaches you how to get into a big war that doesn’t turn out like you think, which is what usually happens in wars.