Pin the Tail on the Subhuman 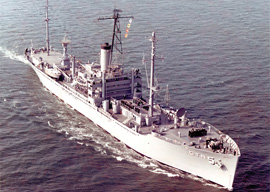 On the brilliant summer’s morning of June 8, 1967, the USS Liberty, a technical research ship lying in international waters about 25 miles north of the Sinai Peninsula, was suddenly attacked by Israeli fighter jets and Israeli Navy torpedo boats. The Liberty‘s captain, immediately realizing that an ally was attacking his ship, frantically signaled his coordinates to the diving jets and the surrounding torpedo boats firing at him, but to no avail. The Israelis kept firing until the boat lay helpless and rudderless in the ocean. Thirty-four American sailors were dead and 171 were wounded, many of them severely.

The Israeli government eventually issued an apology, claiming the Liberty was mistaken for an Egyptian warship, a callous claim because even to an amateur’s eye, the Liberty was no warship. In reality, the Israelis suspected the Liberty may have recorded their unprovoked attack against Egypt the previous day and wanted to make sure no records contradicting who initiated the Six-Day War were available. The Liberty was no spy ship, just an innocent bystander to what was to become a 45-year”and counting”occupation of Palestinian lands, a brutal seizure that has seen millions ordained to live in refugee camps for three generations.

“Jewish settlers on Palestinian lands have been known to express the same kind of opinion about “subhuman” Palestinians that the Saudis use about Jews.”

This week Israel is holding an election, and Benjamin Netanyahu’s Likud coalition is a certain winner. The usual suspects”the Israeli lobby in DC, multi-billionaire Las Vegas and Hollywood tycoons, Rupert Murdoch’s worldwide empire, and other media friends”have been signaled not to hold back. A full press is on to ensure one of the greatest injustices of modern times goes on uninterrupted.

An article in the International Herald Tribune, owned by The New York Times, caught my attention as I sat down to write this. It was by Ayaan Hirsi Ali, a Somali anti-Islamist writer married to Niall Ferguson, whose daughter from a previous marriage happens to be my goddaughter. (Although I am not a Somali, thank God, I am virulently against militant Islam.) In brief, la Ali claims that the Arabs are brought up on hatred against Jews, and it is this hatred that is the greatest impediment to peace in the Holy Land. She makes for a convincing argument until one reads between the lines. She writes that the Koran teaches Arabs to believe Jews are “apes and pigs” and that schoolbooks compare Jews to “rats and cockroaches and also to vampires and a host of other imaginary creatures.”

Since Egyptian president Mohamed Morsi was recently discovered having said just about the same thing, why doesn”t Ali’s argument convince me? That’s an easy one. The offending words echo those of the Saudi Sheikh Abdul Rahman Al-Sudais, imam of the Grand Mosque in Mecca. In broadcasts over the popular Saudi-owned satellite program Iqraa, in Saudi-owned magazines and newspapers, and in school textbooks financed by Saudi oil money, the libel that Jews are the rats of the world is repeated ad nauseam. The Saudi ruling family of 15,000 thieves bought protection from the religious police long ago by financing this kind of propaganda. Only last week a 17-year-old Filipino maid was beheaded in Saudi Arabia on extremely dubious charges. Ten years ago 15 young Saudi girls burned to death when the Wahhabi cops did not allow them to escape the fire because they were improperly dressed. This is the regime, now aided by the chief crook in Qatar, that pays for the anti-Jewish propaganda. It also finances thousands of schools all over the Muslim world that teach the same kind of hate against the West in general and Jews in particular.