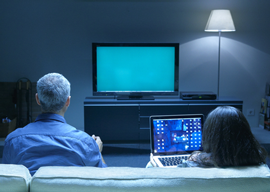 Last week, we learned Sony Pictures had been hacked and millions of people were downloading movies still in theaters. Sony seems to think North Korea may be behind it all, as their forthcoming film The Interview was deemed an “act of war“ by the Pyongyang government. It’s about two CIA guys posing as journalists so they can assassinate Kim Jong-un.

Yeah, right. North Korea can”t even feed itself. You think they have the resources to shut down a massive corporation’s computers? Pirating movies is still pretty difficult, isn”t it?

The WWII blockbuster Fury has been downloaded at least 1.2 million times, so I thought I”d give it a whirl. The first step to downloading a film illegally is to talk to a young person. Millennials may not know anything about the real world, but once you step inside the Matrix, they”re the only ones who know what’s going on. I was told that all you have to do to get any film or TV show is type in the name of the movie and include the acronym TPB which stands for “The Pirate Bay.”

A peer-to-peer site founded in Sweden, thepiratebay.se somehow gets away with hosting millions of movies and shows that have been compressed into computer files that the kids today call “torrents.” Torrents are useless by themselves but there are plenty of programs that can decipher them, the most popular one being Vuze.

“The free market has spoken. It has banished rom-coms to the living room and reserved theaters for superheroes who throw buildings at robots.”

Finding Fury wasn”t easy. The only one available had comments complaining of giant Spanish subtitles that obscured the film; another commenter explained that the video had been shot by a handheld camera in the theater. Most of the results for the film said: “In response to a complaint we received under the U.S. Digital Millennium Copyright Act, we have removed 1 result(s) from this page.” This happened almost every time I looked up a movie in theaters or a TV series that wasn”t on DVD.

It makes sense. The only way you could digitize a movie in theaters is to film it live or get one of the screeners that members of SAG and the WGA are sent. Those DVDs are encrypted, however, and if the code is ever traced back to the guy who got it, his screener privileges are revoked and he could be facing massive fines. Screener copies contain explicit instructions to destroy them after viewing (which you”d have to be a complete pussy to do).

Once the DVDs are available for mass consumption, however, they instantly appear on Pirate Bay. I found Animal House in about 10 seconds and tried downloading it at work, but it slowed down our Internet connection. I tried it at home, but my MacBook Air couldn”t handle the size of the file. After using an external hard drive, I was able to (allegedly”not confessing to anything illegal here) get the film, and after hooking up a bunch of wires, I (might have) got my computer linked to my TV. You need to plug in external speakers and face the computer away to avoid distraction because it’s playing the same movie simultaneously.

It was (allegedly) a huge pain in the ass and the picture looked like shit. The resolution isn”t high enough for anything bigger than a computer. This experiment made it clear that old-timers (and, likely, women) aren”t going to bother with all the steps it takes to watch a film on a tiny screen any time soon. This is a young, male nerd’s game.

Though pirating goes after film and TV with equal aplomb, the effects deserve to be separated. TV is so ingrained into U.S. culture, it can take the heat. The average American still watches TV five hours a day (cue the commenters bragging they haven”t owned a television for years). In many cases pirating benefits television. Monty Python refused to put their sketches on YouTube and blocked anyone who tried. Eventually, they gave in and set up a system that included ads for their DVDs next to each sketch. Within days, sales for the box set jumped 16,000%.

HBO embraces pirating, and their programming chief Michael Lombardo has said his only concern is that pirates may be getting an “inferior product.” As far as they”re concerned, the more eyeballs, the better. It’s working. The Game of Thrones season finale became the most pirated show in history; it’s also HBO’s most popular program, surpassing even the The Sopranos.